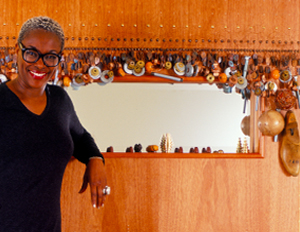 Born and raised in Houston, TX, Riley’s first memories of the art world wereÂ during infancy, when her mother returned to Texas Southern University to complete her art degree. “I don’t remember not being interested in art,â€ she says. “I know oil paints and clay were some of the first smells I recall. I was allowed to draw on a wholeÂ wall in myÂ bedroom–anything I wanted. My mother would paint over it every fewÂ months,Â and I would start drawing again. I had my art books, crayons, and sketch books. My other bedroom walls exhibited reproductions of European masterpieces. I never knew a time when I wasn’t a creative person.â€

When Riley was eight-years-old, she sketched the face of a man who was a distributor for her aunt’s grocery store. The Jewish businessman loved it soÂ much that heÂ purchased it from her. The kindhearted transaction encouraged her to stretch her creative muscles with bigger assignments. Shortly after that, she was drawing covers for school programs and designing the yearbooks,Â and selling art to family,Â friends,Â and others in the community.

Riley continued to develop her gift as anÂ artist,Â and as she grew into adulthood, she left college for San Francisco. Her careerÂ was officially launchedÂ when her father passed away, and left her anÂ inheritance. She chose to use that money to design and create art furniture and sculptures for her apartment, because she couldn’t find anything in the stores that suited her unique taste. She then began working with Bay Area artisans and craftspeople.

While creating art and connecting to San Francisco’s art scene, Riley held a full-time executive position at a leading advertising agency. Her new job put her in front of art directors, photographers, stylists, and other members of the creative community, many of whom supported her efforts as an upcoming artist. During that time, she caught another big break, when her workÂ was shownÂ at Limn, an avant-garde design store, and the first in America to carry Memphis art furniture from Italy.

Riley’s furniture-making venture became so popular in Northern California, that she started getting calls to design furniture from such celebrities as Robin Williams, Morgan Freeman, Danny Glover, Denzel Washington, and Terry McMillan. Her one-of-kind art pieces were also commissioned by museums and sold in art galleries, but the bulk of her business was supportedÂ by wealthy corporate clients and middle class people.

An avid art collector, Riley believes that artists are among some of the smartest people in the world. “If itÂ weren’tÂ for artists, we wouldn’t know that certain civilizations existed,â€ says Riley. “Who would have known about the lives of people who were around when the [cave]drawings in Lascaux [France] were discovered?Â  It’s only because of an artist that we know how people hunted at that time and whichÂ animals were there. Artists often discover things before scientists. But we’re oftenÂ ridiculed, because we’re way ahead of our time.â€

A National Endowment for the Arts Individual Artist Grantee, Riley left San Francisco in 1999 for New York City. Today, with 30 years of art experience, Riley has served on numerous museums boards, curates art shows, and has written about artists of color for national publications. As an educator, she is invited to lecture across the country. She is an art advisor whoÂ builds collections forÂ corporations, including KalahariÂ ResortsÂ andÂ BET, andÂ advises individuals interested in building their private art collections and investment portfolios.Â Among her goals is to cultivate a higher level of art appreciation among people of color. “It is part of my life mission to have more African Americans become collectors of art, and not cars, shoes, and purses,â€ she says.

According to Riley, there are many benefits to working with an art advisor. The client can enter studios and galleries of emerging and established artists that they might never have accessed, and will learn aboutÂ and come to appreciateÂ a wider variety of art.

On any given day, you may spot Riley visiting one of her favorite artist’s studios,Â art galleries, and museums in any city she finds herself. Her favorites are the Studio Museum in Harlem, the Whitney Museum of American Art, the Museum of Art and Design, the New Museum, MoMA, and the Asia Society Museum. She enjoys Miami Basel, the Armory Show, and other shows that feature art of the world. Riley says, for $25, you can visit these institutions and see billions of dollars’ worth of art. She supports many of the contemporary artists of today, many of whom are friends: Carrie Mae Weems, Wangechi Mutu, Shinique Smith, Hank Willis Thomas, Kehinde Wiley, and Nina Chanel Abney are among a fewÂ of herÂ favorites.

One year, she spent her birthday at the Metropolitan Museum. “I traveled to eight countries in one day,â€ says Riley. “I ate lunch at the museum’s restaurant, and tookÂ a break to contemplate the Japanese Tea Garden between countries. Â I ended the day listening to a jazz quartet over martinis.â€

In Part 2 ofÂ The Art of Art Collecting,Â Cheryl R. Riley will share tips to help you build your art collection and portfolio.

Gwendolyn Quinn is an award-winning media consultant with a career spanning over 25 years. She is a contributor toÂ BlackEnterprise.comÂ and BE Pulse (viaÂ Medium.com), Huffington Post andÂ EURWEB.com. Quinn is also a contributor to Souls Revealed and Handle Your Entertainment Business.