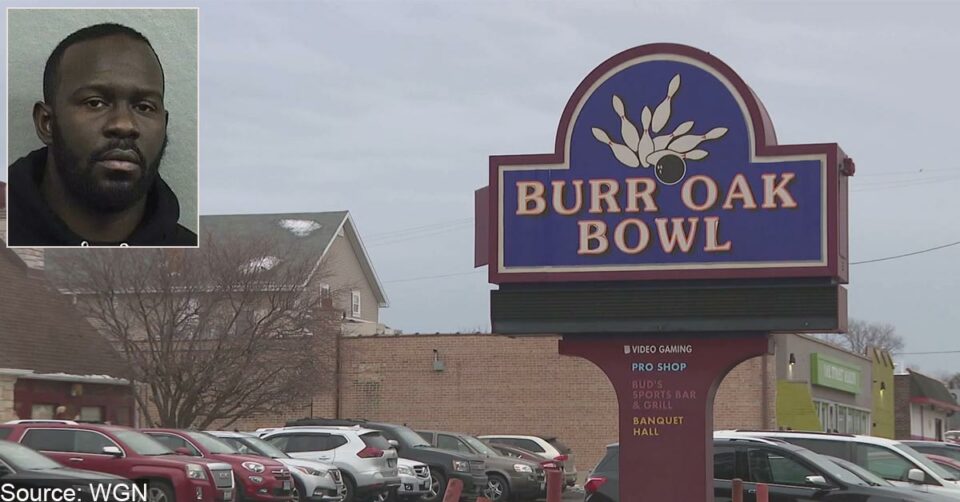 A Chicago rookie cop has been charged with shooting three people in a incident at the Burr Oak Bowling Alley. (Image: Youtube/@NBC7Chicago)

An off-duty rookie Chicago police officer has been charged with multiple crimes, including attempted murder after he shot three people after an argument in a bowling alley.

The Chicago Sun Times reported Kyjuan Tate, 27 was knocked to the ground during an altercation, got up, grabbed his gun and held it against the head of a man at the Burr Oak Bowling alley.

Tate pulled the trigger, and the bullet grazed the man’s right ear and hit a 52 year-old man in the chest. The bullet went through the man’s back and stopped in the left hand of a manager at the alley.

Tate, a Black man has been charged with attempted murder and aggravated battery with a firearm. Judge Luciano Penici ordered a $2 million bond for Tate and if he pays bond he will be forced to wear a monitoring device.

The Police Tribune reported the Chicago Civilian Office of Police Accountability (COPA) was notified early in the morning of Jan. 12 concerning an officer involved shooting. COPA spokesman Ephraim Eaddy said Tate, who was an officer for less than a year, got into an altercation with someone at the bowling alley, which led to gunshots.

Prosecutors say Tate’s sister was using the men’s bathroom shortly just before midnight at the Chicago bowling alley. When a man tried to enter the bathroom, Tate blocked him. Charging Documents eventually the man went outside and started his car to warm it up before walking back into the alley to use the bathroom.

Prosecutors added that Tate confronted the man again and lifted his shirt to show the man he was carrying a gun. That led to an argument and when a relative of the other tried to break it up, Tate threw a punch at the man aiming for his face.

The man Tate was initially arguing with, hit Tate, knocking him to the ground and Tate got up and fired the shot. The gun then fell to the floor as the patrons began panicking. Tate picked up the gun and left the alley and surveillance video showed him leaving the alley with the gun in his hand. Police arrived before Tate could leave the alley.