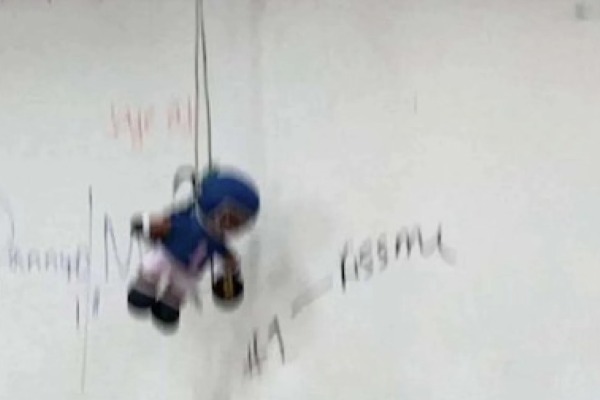 Two Chicago high school teachers are being investigated after arguing in front of students over a Black doll hanging from a cord in a classroom.

A Black instructor at Whitney Young Magnet High School spoke out after taking notice of the African American doll in a white history teacher’s classroom, the Chicago Sun-Times reported.

The two teachers got into a shouting match in front of students. Part of the heated exchange was captured on video.

“Stupid,” one teacher can be heard saying.

“Shut up! Shut up!” the other shouted in response. The teacher then directed a statement to the students saying, “He’s wrong.”

“You[’re] wrong!” the teacher yelled back. “I’m not going to stand up in here with you…you making me feel uncomfortable…”

A photo shared online shows the doll—a football player in a blue uniform—hanging from a whiteboard with the cord around its neck, NBC Chicago reported.

On Tuesday, the school’s principal Joyce Kenner released a statement to students and families saying the school would follow “the official disciplinary protocol established by Chicago Public Schools.”

“Unfortunately there was an incident in which a teacher hung a small stuffed African American football doll by a pull down string from a projector screen in their classroom,” Kenner wrote.

“The teacher indicated he found the doll in his room and wanted the students to see if someone would claim it. A colleague approached the teacher about the doll and the conversation between the teachers became contentious.”

The Chicago Teachers Union released a statement condemning the encounter and potentially racist actions from one of their teachers.

“We understand the investigation at Whitney Young is ongoing, but practices that mitigate the harm of racial biases must also be ongoing and consistent in our schools,” the statement read in part. “And any definition of ‘safety’ must include creating and reinforcing an environment of equity and inclusion for all students, staff and faculty of color.”