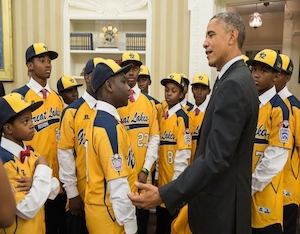 Chicago’s own Jackie Robinson West showcased their own spark when one of the players challenged President Barack Obama to a game of hoops.

“I told the president I wanted to face him in basketball,â€ Jackson said, according to the Chicago Tribune. The president reportedly dismissed the 13-year-old upstart by saying that he would have to take a rain check, but promised to schedule a match the next time the president’s home in Chicago.

“The president told him that he needs to grow a little bit more before they play,â€ team manager Darold Butler said. The team arrived to the White House dressed in their world-renowned golden jerseys and red ties. They also, alongside their adult staff, presented gifts to the Commander-in-Chief and the First Lady.

Team jerseys and custom baseball gloves were the gifts, as Michelle Obama’s glove was stitched with the worlds “Let’s Move,â€ in honor of her initiative to raise a healthier generation of kids and end obesity. President Obama’s had “POTUSâ€ inscribed on the glove and jersey he received.

The Little League team from the South Side of Chicago etched its way into the history books, becoming the first all-Black team to win the U.S. Title at the 2014 Little League World Series. Their dominant wins propelled them into the nation’s heart, however, they ultimately lost to South Korea for the world championship.