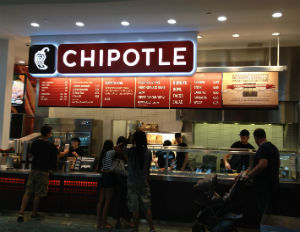 According to recent reports, Chipotle spokesperson Chris Arnold stated that the company will be closing all stores on Monday, Feb. 8 to have a nationwide meeting about its recent health epidemic. Following a huge norovirus and E. coli outbreak last year, the company, most famous for their burritos and guacamole, has faced major scrutiny from media and from Chipotle-lovers throughout the country. The meeting on Feb. 8 will include all-employees and will seek ways to fix the health breaches.

In an email, Chipotle Founder, Chairman and Co-CEO Steve Ells wrote, “We want to thank our teams for all of their hard work, to discuss some of the changes we are making to enhance food safety, to talk about the restaurant’s role in all of that, and to answer questions from employees.â€

Chipotle also plans to double the amount of free food that customers receive in 2016.

In 2015, there were six norovirus outbreaks linked to Chipotle. They began in Seattle in July, occurred in Oregon and Washington in October, and quickly spread to seven other states, causing an additional 53 people to get sick. By December, 200 had been sickened after eating at a Chipotle in Boston, becoming one of the worst outbreaks in history.

“Chipotle is an incredibly focused company. Our menu has remained virtually unchanged for the last 22 years and we only have 64 ingredients in our food. Rest assured that we have looked at each of these ingredients, where they come from and how they can be made even safer. I believe our restaurants are safer today than they have ever been,” Ells confirmed on Chipotle’s site.

While sales slid 30% and the stock’s price plummeted nearly 40%, according to Forbes, a total of nine lawsuits have been filed. Maybe closing all stores for one day to brainstorm solutions and try to fix the ongoing health issues would be beneficial for future income and brand dependability. However, JPMorgan said that this is just the beginning of a long slide for Chipotle. According to Business Insider, analyst John Ivankoe predicted that Chipotle’s same-store sales will decline through September 2016. Ivankoe estimated that sales at stores that have been open at least a year would fall 13% in the fourth quarter of 2015, then decline 12%, 7%, and 4% in the first, second, and third quarters of 2016.

What are your thoughts? Share with us below in the comments section.