How Do You Choose an HBCU? Thereâ€™s an App for That 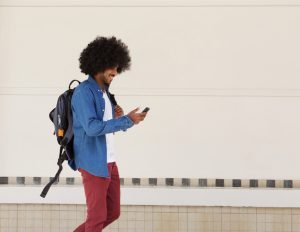 I learned the other day that my 87-year-old father visited Hampton University when he was about 15 years old. My grandmother had taken him along while helping my aunt, my father’s older sister, to get settled as a student.

Although my father ended up not going to Hampton (he would graduate at the age of 51 with a degree in electrical engineering and as a member of two honor societies), I was thrilled to know that he had once walked the grounds of the great historically black campus.

Fortunately, for today’s students, before you visit an HBCU campus you can download an app to help you decide whether or not a school is right for you. Using the app can help you whittle down the number of campuses to visit in person.

As reported by the website okayplayer, Jonathan Swindell, a 21-year-old junior at Grambling State University, has created an app that helps prospective HBCU students select the school that’s the best fit for them.

Called HBCU HUB, the app provides information on 86 schools including a useful “Report Cardâ€ that lists practical information on each institution, such as academics, cost, and a school’s overall ranking.

Choose the School that’s Right for You

It also includes a host of useful features as well as helpful information on scholarships and tips on rÃ©sumÃ© writing and job interviews.

“It’s a lot easier to get information on a PWI (predominantly white institute),â€ Swindell saidÂ in an interviewÂ with the Southern Digest, according to okayplayer. “They’re a lot bigger and have a lot more resources behind them, whereas, at an HBCU, the information can be a bit scattered, so I saw a pain point within our community and HBCU HUB serves to fix that.â€

Since its release, HBCU HUB has been downloaded more than 1,000 times and is being used in at least 32 states and five countries. The free app is available to download on both AppleÂ andÂ AndroidÂ devices.

To read more about how to choose an HBCU that’s right for you, go here.