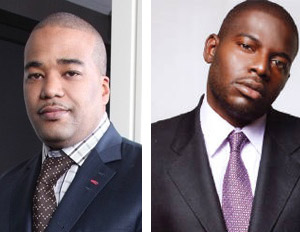 Chris, what happens to your other company Brand Asset Group in the wake of this merger?

Lighty: Brand Asset Group and Violator stay the same. We’re not disappearing, that’s blood, sweat and tears. That’s why it’s Primary/Violator and Brand Asset will still live on its own, inside the hub. We can’t give up our minority certification, come on. We worked too hard for that. Also, we’ve built up a really strong track record with what we’ve been able to do with Coca-Cola and the World Cup and bringing Drake to Sprite. We’re going to continue to use the moniker and also [promote] brand synergy.

Does the new venture include more than urban artists?

Williams: The purpose of the venture is to really let people know that we’re not just urban. People know that Violator [and] Family Tree can do urban all day in their sleep. With the Primary Wave team and staff we have, we’ll be able to show and remind people that Chris has been with Mariah Carey, has taken LL Cool J and taken him pop; that I took OutKast from a southern rap group to become the biggest rock group in the world; that Larry has guided the careers of numerous artists across every genre. Anyone can be managed by us, as long as they’re willing to work and they’re willing to do what it takes to build the brand that they claim they want to be. A lot of people talk about doing it but we want to work with artists who are really about getting it done.

How would you describe what good management is?

Williams: There are so many different ways to get a manager, so many different paths to getting a team together. But the importance of a manager–of why big companies pay CEOs–is that someone has to guide the ship. At the end of the day, you have to have someone competently driving your career. Most artists want to be creative people or they want to be famous or whatever their driving force is, but they have to be able to handle the business side as well and having competent people around can help prevent the pitfalls. When you have someone like Primary Wave as your company what we do is not let the label waste your money or be a waster of your time, filling your schedule with fluff. We can help get your message out to the people better so having a good team around you is one of the most important things that you’ll ever run into. Your talent will only get you so far… Now you have to have techniques to think outside of the box. We’re creating opportunities, creating income streams, building brands. I don’t want to manage an artist that’s not a brand. If you can’t be a brand, if you just want to rap, if you just want to sing, then I don’t want to manage you.

What’s a new project that you’re excited about?

Lighty: It’s really our energy shot Street King that we’re focused on with 50 Cent. The whole premise behind it and we’re really proud of and really pushing is to feed a billion meals to those in need around the world. We have a great association with the United Nations’ World Food Program that we’re very proud of, it shows that they’ve looked at the company and our commitment to really make a change in the world that they would stand next to us as a new company and Curtis Jackson and say, Hey, this is something real. We hope it happens and we feel like we’re really going to take charge of this market. 5-Hour energy is the leader in this market, we’ll be No. 2 quickly. We’ll go head-to-head against 5-Hour Energy. We’re going to market to our audience, give it the pop culture twist. We’re very adamant that we’re going to feed a billion meals over the next five years. That’s our goal.