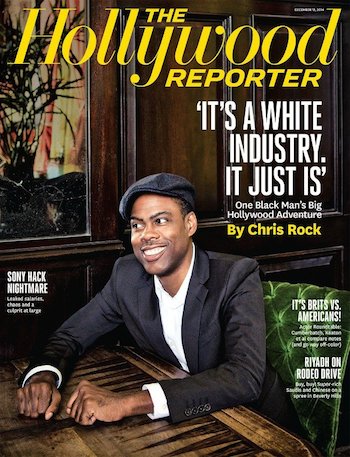 The growing hype for Chris Rock’s latest cinematic effort has found the funny man making rounds in the press. He was asked by The Hollywood Reporter to write an essay, which found the New York comedian calling Hollywood “a white industry.”

Rock, 49, has a new movie titled Top Five that hits theaters next week. The picture garnered a $12.5 million distribution deal from Paramount Pictures at this year’s Toronto International Film Festival. In his strongly written essay with The Hollywood Reporter, the actor-director had this to say of Tinsel Town:

“It’s a white industry. Just as the NBA is a black industry. I’m not even saying it’s a bad thing. It just is. And the black people they do hire tend to be the same person. That person tends to be female and that person tends to be Ivy League. And there’s nothing wrong with that. As a matter of fact, that’s what I want for my daughters. But something tells me that the life my privileged daughters are leading right now might not make them the best candidates to run the black division of anything.

And the person who runs the black division of a studio should probably have worked with black people at some point in their life. Clint Culpepper [a white studio chief who specializes in black movies] does a good job at Screen Gems because he’s the kind of guy who would actually go see Best Man Holiday. But how many black men have you met working in Hollywood? They don’t really hire black men. A black man with bass in his voice and maybe a little hint of facial hair? Not going to happen. It is what it is. I’m a guy who’s accepted it all…

It’s the most liberal town in the world, and there’s a part of it that’s kind of racist – not racist like “F– you, n—–” racist, but just an acceptance that there’s a slave state in L.A. There’s this acceptance that Mexicans are going to take care of white people in L.A. that doesn’t exist anywhere else … You’re telling me no Mexicans are qualified to do anything at a studio? Really? Nothing but mop up?”

The recent host of Saturday Night Live and former alum also broke down his issue with how few black women are considered for capable roles in TV and film. Citing the barrage of True Detective Season 2 and Fifty Shades of Grey casting rumors as an example, Rock said, “I never heard anyone go, ‘Is it going to be Amy Adams or Gabrielle Union?’ for that show. I didn’t hear one black girl’s name on those lists.” “Is there a single black woman in Interstellar? Or Gone Girl? The Purge? Neighbors?”

The lack of people of color in films and television has been a consistent theme in Rock’s rounds, as he also addressed the difference between white and black fame on CBS This Morning. “Tom Hanks is an amazing actor, but Denzel Washington is a god to his people. Denzel Washington has a responsibility to his people that Tom Cruise, Liam Neeson, all these guys don’t have.”

Chris Rock’s op-ed is a must-read piece, which you can check out in full by clicking here.