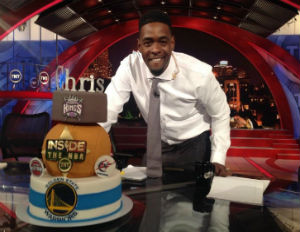 Former NBA and Michigan Wolverines All-star, Chris Webber wants to get back in the game.

Only this time he’ll be running the show. The Webber Group, which Webber leads, announced Thursday on Twitter that they are looking to purchase a majority stake in the Atlanta Hawks.

The Webber Group pt out this statement, “After garnering support of local community and business leaders, this week The Webber Group contacted the NBA to respectively express our intentions to acquire the majority interest of the Atlanta Hawks. Our mission is to give the team back to the community that sustains it: Georgia. We will field a competitive team of high character individuals that will exhibit championship characteristics off the court, while striving for that elusive title on the court.”

The team went on the auction block after owner Bruce Levenson agreed to give up his majority stake in the team and sell after he reported himself to the NBA citing a racist e-mail he sent out in August 2012.

During the course of an investigation it was later revealed that Hawks General Manager, Danny Ferry had made disparaging comments about NBA Small Forward Luol Deng on a conference call with team owners last summer, saying Deng “has a little African in him.”Â Ferry has since taken an indefinite leave of absence.

Black Enterprise reached out to former NBA sharpshooter Dennis ‘3D’ Scott for his opinion about the matter.

Being an Atlanta native and former Atlanta Hawk employee, Scott is in a unique position to comment on the situation and the mood across the city after the story broke.

He tells us his reaction wasn’t the shock or revulsion many felt when he read the e-mail. Being from the Washington, D.C., area, Scott says he’s known Levensen and Atlanta Hawks General Manager Danny Ferry since he was 12.

“Levensen’s e-mail — if you read it all the way through — you read a frustrated billionaire trying to figure out how to turn a franchise around. He looks across the street and sees Falcons owner Arthur Blank, who survived the Michael Vick fiasco and people are still going to this building and supporting his team. That’s how I perceived his e-mail.” Scott also tells BE, “With Danny Ferry it was a very insensitive e-mail but Danny Ferry isn’t racist.”

Scott says Ferry “read something at a poor time of the day at a business setting which he shouldn’t have done. He admitted it and apologized for it, but I don’t believe in my heart because I’ve known Danny and his dad and his family my whole life. They’re not racist people.”

But Scott believes Ferry should take the high road and start again elsewhere, saying, “Was it poor judgment? Heck yeah. Should he keep his job in Atlanta? Probably not. Should he work again in the NBA? Yes. But he probably shouldn’t work in Atlanta because that’s one of the few things that you can not really touch in Atlanta with all its history. I just don’t see how he can continue to keep his job.”

Webber like Scott is also a basketball analyst on NBA TV.

According to ESPN, “Webber played 15 seasons with five teams, averaging 21 points and 10 rebounds in 831 games. He was a five-time All-Star and was named rookie of the year in 1993-94. He is perhaps best remembered for calling a timeout Michigan did not have during the 1993 NCAA title game, and also was linked to receiving improper benefits while with the Wolverines.”

It’s still unclear how much the Atlanta based Hawks team is valued. The Los Angeles Clippers, another team that an NBA owner was forced to give up after disparaging comments, was purchased by former Microsoft CEO Steve Ballmer for $2 billion earlier this year.

NBA legend Michael Jordan is the only ex-NBA player to own a majority stake in a team. Former NBA star Shaquille O’Neal also has a stake in the Sacramento Kings.

Dominique Wilkins, the former Hawks legend who now works in the team’s front office, also has said he is interested in purchasing the team.