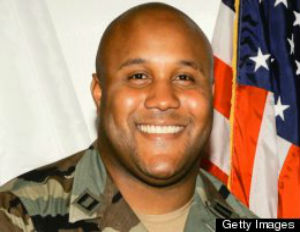 In this handout picture provided by Los Angeles Police Department, the alleged suspect Christopher Jordan Dorner is seen on February 7, 2013 in Los Angeles, Calif. (Photo by LAPD via Getty Images)

Elected officials and law enforcement authorities have offered a $1-million reward for information leading to the arrest and capture of fugitive ex-cop Christopher Jordan Dorner, the LA Times reports.

A massive manhunt for Dorner began last week after the 33-year-old former Los Angeles police officer and Navy veteran allegedly began a killing spree that has left three people dead and two others injured. Dorner is believed to be upset over his firing from the department in 2009.