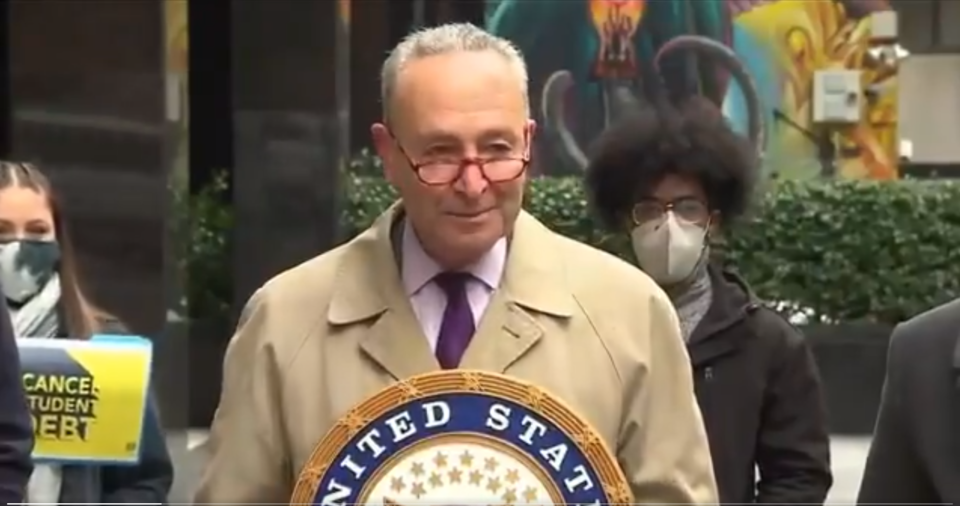 In a press conference, Schumer stood alongside Congressman-elect Richie Torres and Representative-elect Jamaal Bowman to announce they have “come to the conclusion” that the president-elect can “forgive $50,000 of debt the day he becomes president.”

“This debt is a huge burden on the backs of our students standing in the way of them and their economy and it stays with them for a very long time,” Schumer told reporters.

“We have come to the conclusion that President Biden can undo this debt, can forgive $50,000 of debt the first day he becomes president,” Schumer said outside his office in Midtown Manhattan. “You don’t need Congress; All you need is the flick of a pen.”

Student loan forgiveness has become a hot topic in recent years. Student loan debt is the second highest debt in the U.S. debt Americans carry today at $1.4 trillion. Only home mortgages carry more debt. Betsy DeVos, the current Education Secretary, does not believe in student loan forgiveness calling the idea of free college “a socialist takeover of higher education.”
Many politicians and academics believe Biden has the ability to free up the debt more than 40 million Americans with the stroke of a pen. Student debt has affected millions of Americans who are unable to take jobs, live alone, move to another state or start a business because of their student debt.
The subject was also a hot topic during the Democratic primary debates. Massachusetts Senator Elizabeth Warren said during the primary debates she would cancel student loans on her first day. Warren and Majority Whip James Clyburn also introduced the Student Loan Debt Relief Act last year.
While some believe student debt can be solved through an executive order, others aren’t quite so sure.

“Using an executive order to forgive federal student loans will likely be met with a lawsuit and preliminary injunction, and eventually fail,” higher-education expert Mark Kantrowitz told CNBC. “Also, trying that route immediately upon taking office would block any attempt at working with Congress in a bipartisan manner.”