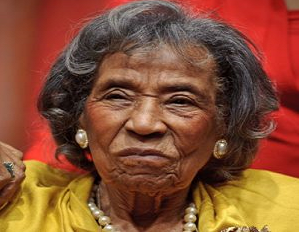 Amelia Boynton Robinson, a civil rights activist who nearly died while helping lead the “Bloody Sunday” civil rights march in 1965, passed away on Wednesday, Aug. 26. She was 104-years-old.

Boynton Robinson was amongst the brave leaders who were beaten during the voting rights march across the Edmund Pettus Bridge in Selma, Alabama in March 1965. This day later became known as “Bloody Sunday,” with her role in the historic event being chronicled in the award-winning film Selma by actress Lorraine Toussaint. Fifty years later, to celebrate the anniversary of the Voting Rights Act of 1965, Boynton Robinson was pushed across the Edmund Pettus Bridge by President Barack Obama, as hundreds of other leaders followed them.

[Related: Why We Must Continue The Work of Selma To Remake America]

“Earlier this year, in Selma, Michelle and I had the honor to walk with Amelia and other foot soldiers of the Civil Rights Movement,” said President Obama in a statement. “She was as strong, as hopeful, and as indomitable of spirit–as quintessentially American–as I’m sure she was that day 50 years ago.”

In January, the Tuskegee University alum attended the State of the Union address as a special guest of Alabama’s first elected black congresswoman, Rep. Terri Sewell, who said that Boynton Robinson’s 1964 run for Congress paved the way for her. Boynton Robinson was the first woman to run on a Democratic ticket in Alabama and the first African American woman to run for Congress in the state.

Born on August 18, 1911 in Savannah, Georgia, Boynton Robinson dedicated her life to making a difference in her community. In addition to working as an educator and with the U.S. Department of Agriculture in Selma, Alabama, Boynton Robinson also worked with the Southern Christian Leadership Conference (SCLC) and helped to plan the Selma Montgomery march.

The family is currently planning events in Boynton Robinson’s honor at Tuskegee and working to host a ceremony at the Edmund Pettus Bridge on Sept. 8.