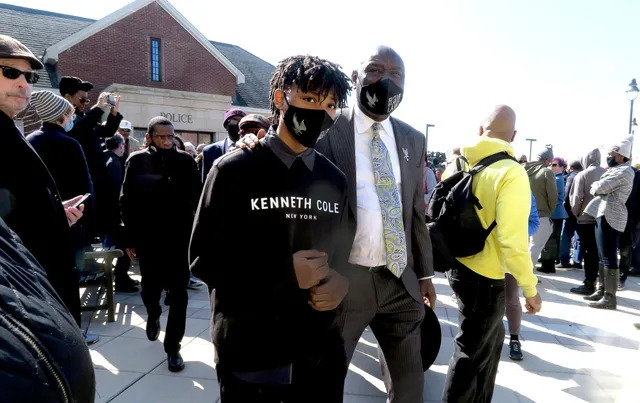 Ben Crump, a nationally recognized civil rights attorney who has represented the families of George Floyd, Breonna Taylor, and Ahmaud Arbery, has been retained to step in, NJ.com reported. He was hired by the family of  Z’Kye Husain, a Black eighth-grade student who was forcefully detained by Bridgewater police following a fight with another teen that was captured on a now-viral video.

The video shows both teens in an argument that escalates into a physical altercation. Two unidentified officers sprint to the scene. One male officer pins Husain to the ground, handcuffing him while kneeling on his back. The other teen, Joseph, who identifies as Colombian and Pakistani, was appeared to be directed by the female officer to sit on a nearby couch without any restraints.

On Wednesday, Crump held a press conference outside the Bridgewater police department to shed light on the police officers’ actions and to demand justice.

“When you look at the reason (the video in this case) went viral, it’s because Black people for decades have been saying, ‘Police interact with us differently,’ Crump said at the press conference. “This video gave us ocular proof…the police in a split second saw a white kid on top of a Black kid having an altercation and made a determination that the white kid was presumed innocent and the Black kid was presumed guilty.”

“I don’t understand why I got treated differently because of the color of my skin,” Husain said. “I feel like I shouldn’t be lucky that I wasn’t hurt or killed by people who promise to protect us,” Z’Kye said. “That’s why we are here today to change that—to not be lucky to be treated like animals.”

Rev. Al Sharpton was expected to attend the rally but did not show. During the event, local Black activists voiced their opinions, calling both Crump and Sharpton opportunists.

“This is poverty pimping,” one shouted.

The interruptions prompted Crump to lead the conference from inside a multipurpose room to inside the police station. There, he and other activists, Husain, and his family called on the officers to be fired and undergo more training. Alleging racial bias, the group is considering filing a federal civil rights lawsuit against the department.

The NAACP-NJ State Conference has also demanded the Bridgewater police department remove the two officers involved in the incident pending the investigation.

There were no charges brought on the teens, but both were banned by the mall for three years. The police officers’ actions are currently under investigation by the Somerset County Prosecutor’s Office.