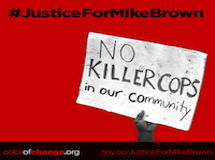 Over the past week, ColorofChange.org, the largest online civil rights organization in the country, has been on the ground in Ferguson, Missouri, organizing with local groups demanding justice for Michael Brown and an end to widespread police violence.

Now the group is partnering with We Act Radio to provide a live video stream of the conditions on the ground to ensure these events are reported fairly and accurately. Already, the livestream has captured footage of targeted journalists being shot with bean bags and rubber bullets as well as interviews with community members, faith leaders, and others in Ferguson.

“We are committed to lifting up the voices of folks on the ground in Ferguson who are fighting for justice for Michael Brown and an end to systemic racial profiling and police violence,” says Rashad Robinson, executive director of ColorOfChange.org. “The stakes are so high. In the past week, two young Black men have been killed by Missouri police, and residents, journalists, and organizers continue to face daily assaults on their safety and civil rights. We’ve teamed up with We Act Radio to broadcast these appalling injustices and ensure that local and national authorities can’t turn a blind eye.â€