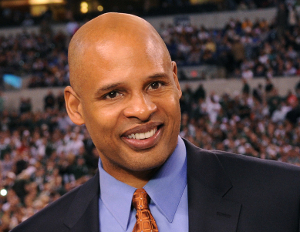 Esteemed CBS Sports analyst Clark Kellog will be one of the many luminaries participating at this year’s Black Enterprise Entrepreneurs Conference.

Kellog will moderate the opening portion of the event, the highly anticipated Fireside Chat with Magic Johnson, sponsored by Nationwide.

The discussion will delve deep into the many business dealings of Johnson and how he got started as an entrepreneur.

You can see the discussion live here at 2:30 pm EST by signing up for the livestream.

Kellog, who will be making a homecoming of sorts as a native of Cleveland, Ohio, still holds Ohio’s state record for most points in a high school championship game after scoring 51Â  in a state championship game for St. Joseph High School. He then continued to a stellar three-year career as a forward at Ohio State University, averaging 15.0 points per game and amassing 1,285 points in just three seasons. He earned All-Big Ten and Most Valuable Player honors (1982) for the Buckeyes.

He entered the NBA Draft following his junior year, and was the No. 1 pick of the Indiana Pacers. Kellogg played for five seasons before retiring due to a chronic knee condition.

After joining the NBA, Kellogg continued his education at Ohio State and graduated in December 1996 with a degree in marketing.

Kellogg served as a studio and game analyst for ESPN from 1990-1997. He joined CBS Sports full time in 1997 and has spent the last 14 years on CBS Sports covering the NCAA Men’s Basketball Championship, first as a game analyst and then as co-host of first- and second- round studio coverage. He has co-hosted the Road to the Final Four, the Final Four and the Championship game since 1997.