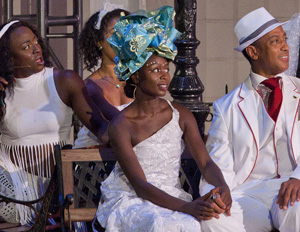 CTH spent the past 15 years providing actors, directors, designers, playwrights and technicians of diverse backgrounds with comprehensive theater access. Founded in 1999, the theater’s brought an invaluable amount of culture and artistic opportunity to the surrounding underprivileged community, of which it serves.

Ty Jones, Producing Artistic Director of CTH, says he is proud of the theaters growth and the impact its had on youth in the community.

“We have an educational program called project classics, where we went in to Manhattanville and Grant housing developments, which is essentially majority known as the projects, I hate calling them that, and we sought out students in the housing projects because we believe that they should be part of the conversation of theater as wellâ€, said Jones

The Classical Theater of Harlem has presented a repertory range of works by classical playwrights, Chekhov, Euripides, and Shakespeare, as well as popular 20th century playwrights Langston hughes, august Wilson, and Derek Walcott. They believe by keeping cost low, it gives more of an opportunity to low income families seeking to experience theater.

“Theater is becoming more and more elite and its putting people in a position, not to be able to afford to go see theaterâ€, said Jones.

Keeping theater family friendly, and affordable is the theaters key to staying embedded in the community. They’re offering a free, Shakespeare classic production, The Tempest, running from July 3 through the 26 at the Richard Rodgers Amphitheater in Marcus Garvey Park as a part of the Summer Stage festivities in New York City this coming summer.

Maintaining a sense of diversity is such an important factor in the theater’s movements, making sure they are consistently providing people of color with a platform to create, develop, and showcase exciting new characters like those of the musical Witness Uganda, created by Griffin Matthews and Matt Gould. Called “a joyous wrenching experienceâ€ by the Boston Globe, the works won AmericanAacademy of Arts and Letters 2014 Richard Rodgers Production Award for musical theater.

Patina Miller, Tony Award winner, Best Actress in the musical Pippin, and special guest at the CTH celebration, speaks highly of the production and of her “friendsâ€ Matt and Griffin, for working tenaciously to reach this point of recognition. She believes in the midst of america’s current angst, we need not forget the people spreading positivity.

“Theres so many things going on in america today and I think this is just another one of those things, its about the mission work in Uganda and its about being a good personâ€, said Miller, “You hear of all the bad things that happen in our society but you forget about the people who are trying to go off and do good things.â€