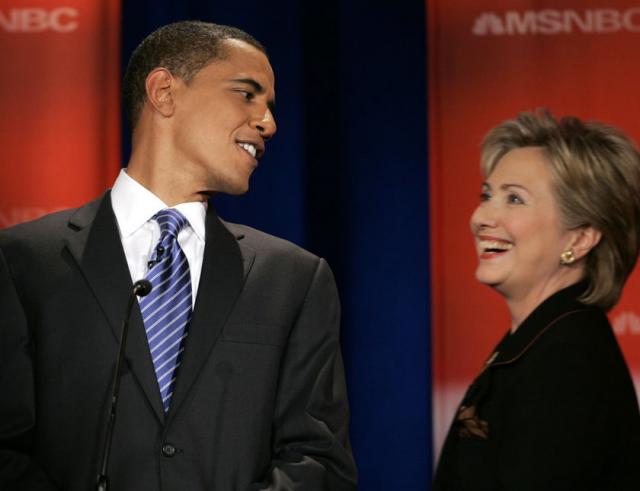 Sens. Barack Obama and Hillary Clinton pass each other before their February debate. (Source: GOP)

Sen. Hillary Clinton has accepted the post of secretary of state under the new Obama-Biden administration, the New York Times is reporting.

Clinton made the decision after additional discussion with President-elect Barack Obama about the nature of her role and his plans for foreign policy, according to the Times.

“A Clinton associate confirmed that her camp believes they have a done deal. Senior Obama advisers said Friday morning that the offer had not been formally accepted and no announcement would be made until after Thanksgiving,” says the Times.

Of particular concern about Clinton’s nomination was former President Bill Clinton’s agreement to release the names of all donors who had given at least $250 to his presidential foundation and library. The former president has long insisted on keeping the names private.

He has also agreed to other concessions, writes the Associated Press, including submitting his speeches and public speaking schedule for the State Department to review during the time his wife serves and alerting officials there about any new sources of income. He also has indicated he would step away from day-to-day management of his foundation, where he has raised millions from foreign governments and companies to help fight poverty and AIDS in the developing world.

“I’ll do whatever they want,” the former president said earlier this week at a ceremony renaming the Triborough Bridge for the late Sen. Robert F. Kennedy.

The New York Senator would be Obama’s highest-ranking cabinet officer as the secretary of state is fourth in the line of presidential succession.