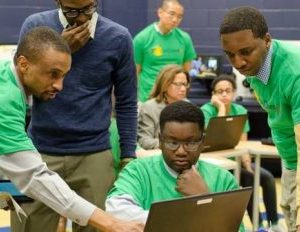 I was thrilled to meet Meka Egwuekwe, executive director of the nonprofit CodeCrew, at the 2016 Black Enterprise TechConneXt Summit in San Francisco. Egwuekwe quit his job to run CodeCrew. He is a former director of software development at Lokion Interactive and has been a software developer for 19 years.

Putting Memphis on the Tech Map

What is CodeCrew? Founded by Egwuekwe, Petya Grady, and Audrey Jones, CodeCrew teaches middle and high school students essential technology skills, like coding, app development, Javascript, Python, and more. Based in Memphis, CodeCrew is focused on equipping the city’s underrepresented groups with tech skill and knowledge.

“My co-founders and I very much believe that persuading more kids from underrepresented groups to consider college, career, and entrepreneurship in computer science is fundamental to the prosperity of Memphis,â€ Egwuekwe wrote in an email. “This city will soon be the first majority African American metropolis in the country, and we cannot ‘white and Asian male’ our way to prosperity. We must persuade young African Americans, Latinos, and girls to pursue these 21st-century opportunities, or else.â€Â

CodeCrew recently wrapped up a two-day Memphis City Pride hackathon, where kids who had participated in the organization’s three summer camps came together to meet a programming challenge and compete for prizes. The event was funded by CodeCrew’s first and most prominent partner, the Memphis Grizzlies Foundation, the philanthropic arm of the Memphis Grizzlies NBA basketball team. More than 40 middle school and high school kids participated.

“The event lived up to being a high energy, exciting affair that got kids pumped about coding, just as we’d intended,â€ Egwuekwe says.

In addition to the hands-on tech training CodeCrew provides, the organization has been influential in returning computer science elective classes to at least two inner city Memphis schools. Egwuekwe expects these course offerings to grow and expand.

“This is also our first step towards eventually offering AP computer science [classes] in urban schools,â€ he says.

Although CodeCrew is focused on Memphis, Egwuekwe and his co-founders are seeking to grow its networks “dynamically beyond Memphis.â€

“We will be an active partner in Oakland-based Qeyno Labs’ upcoming Tech Equity Week in April 2017. We also hope to develop ties with other organizations, such as Yes We Code, Code.org, The Hidden Genius Project, and others. CodeCrew firmly believes in the cooperative spirit of spreading youth tech education to underrepresented groups across Memphis and across the country.â€