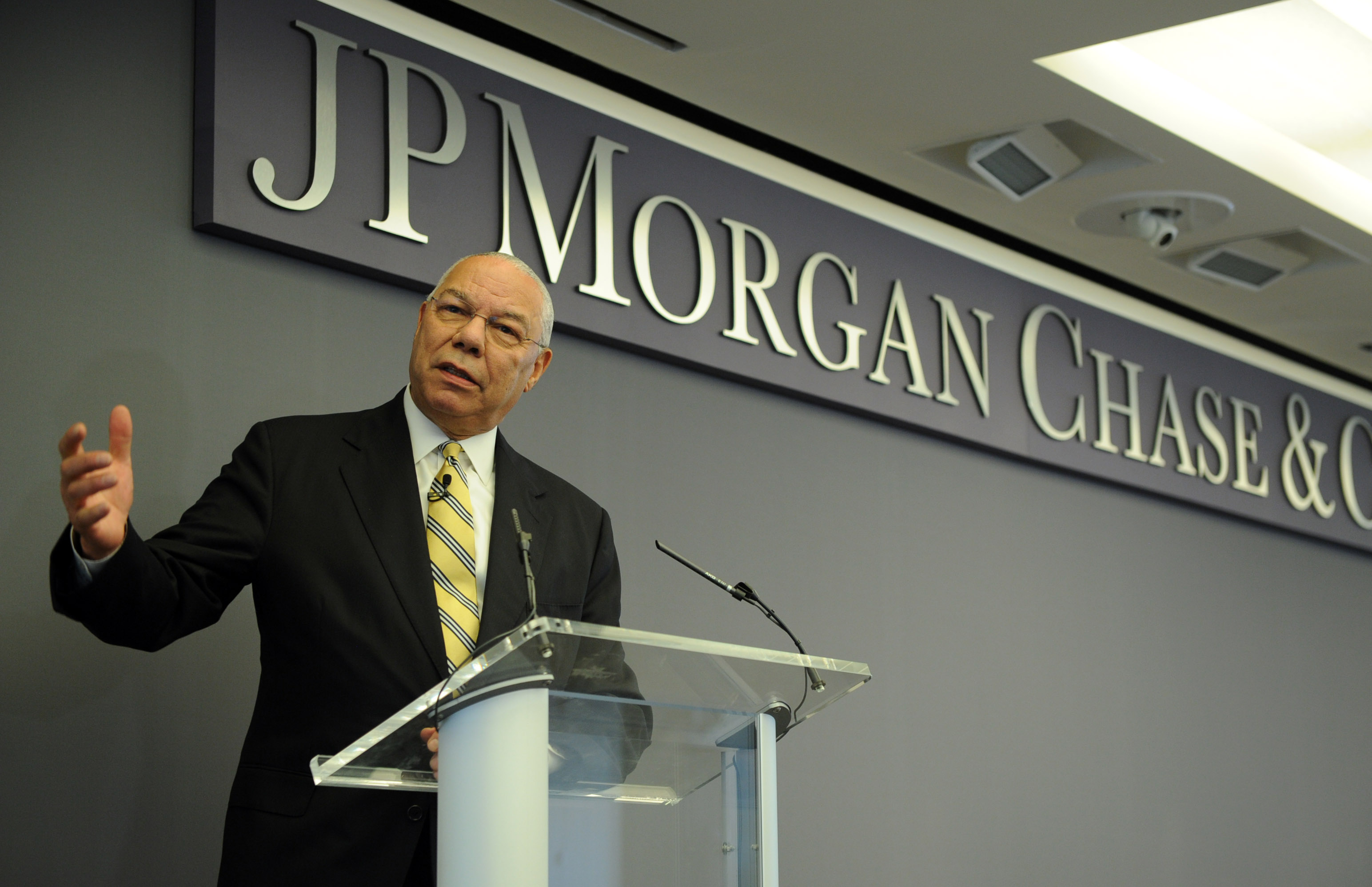 As a young black boy from the South Bronx who fought through America’s segregated system to become the first and only black chairman of the Joint Chiefs of Staff, and later the first black U.S. Secretary of State, Gen. Colin Powell knows all about beating the odds and achieving success.

Tracing back to the struggles he faced as a young boy growing up in an urban community, Powell spoke at a private luncheon to show his support of JPMorgan Chase & Co. The Fellowship Initiative (TFI), which helps to serve minority boys who come from backgrounds similar to his.

With attendees including JPMorgan Chase Chairman and CEO Jamie Dimon, former New York Mayor Michael Bloomberg, and Gail King, who moderated a sit-down conversation with two of the program’s fellows along with Colin Powell, the luncheon was held to announce TFI’s expansion to two other U.S. cities including Chicago and Los Angeles. Started in New York in 2010, TFI is a program designed to help young men of color succeed personally and professionally by partnering them with a JPMorgan Chase associate who serves as their mentor, helping them to excel academically in high school and college.

After sharing personal anecdotes and expressing his support for TFI, BlackEnterprise.com caught up with the former secretary of state, and founder of America’s Promise, which helps to provide pathways of success to all young people, to talk about the importance of having programs like TFI and the role that mentors and the media play in helping to shape the future of young men of color.

BlackEnterprise.com: How important do you think it is for programs like TFI to exist where support is offered to young men of color, not just at the high school level, but at the college level as well?

Colin Powell: It’s vital, and not just in high school and college. What we didn’t focus on here today is that it has to begin when they’re infants. White, black, boys and girls, the education process begins in a mother’s arms. With African Americans, especially black boys, if they are not taught to read, if they don’t know their numbers, if they can’t tell time, if they don’t know how to mind their manners then they’re in trouble as soon as they get to first grade. And if they’re not up to reading level by third grade, the likelihood is four times greater that they will drop out.

Now in Obama’s latest “My Brother’s Keeperâ€ initiative, he’s asking all Americans to commit to mentoring a young person. Although the search for a good mentor exceeds all racial lines, how important do you think it is for young boys of color to see someone who looks like them volunteering their time to make a difference?

I think it’s important for young boys and men of color to realize that there are very successful men of color in their life. They now can see a president and a former secretary. And what I’ve always said in my own life is that I was mentored by white folks just as much as I was by blacks. I was raised in the South Bronx where we all were different. There were blacks, whites, you name it. So I don’t like to narrow the ability of one human being to get into the life of another human being just because of the color of their skin.

One point I’ve made throughout my career when people ask, “What was it like to be the first black chairman of the Joint Chiefs of Staff?â€ I say “No, I was the first chairman of the Joint Chiefs of Staff who was black. There ain’t a white one somewhere.â€ I always say that I’m black. I don’t ever want to avoid that distinction because of those who went before me and I don’t want to take credit for what they did. But at the same time, I never like to define myself in terms of being in a position because I’m black. I just happen to be black. I got this position because lots of folks took care of me along the way, black and white, good and bad. I learned as much from my bad leaders as I did from my good leaders. That’s what experience is all about. That’s why failure is necessary. And we’ve got to teach our young black boys to behave. You do not solve problems the way you see it on television shows, by hitting someone upside the head.

Or, if you watch “48 Hours,” by taking a gun out and shooting somebody knowing that you’re going to get caught and you’re going to jail for the rest of your life. So we have got to teach them self-discipline and you don’t solve problems by fighting and doing the wrong thing in life. You don’t solve problems by sticking a needle up your nose or a needle in your arm. And you have to be respectful of women. That’s why I hate this “baby daddyâ€ and “baby mommaâ€ stuff. You’re mothers and fathers.

You have a different responsibility and we’ve got to do something about the fact that 72% of our children in the African American community are born outside the bonds of marriage. We can’t lecture people to get married, but we need it. But you’re seen as politically correct if you focus too much on this, but they can’t do anything to me. I say what I want.

Earlier at the event you joked to the boys “Don’t appear on reality television,â€ but I’m sure you were serious.

Now with the influence of media on our culture today, what advice do you have for young boys who might not have outside positive influences like a TFI at their reach?

Well their caregivers should not allow them to watch it. I’ve been at schools with 80% single parent homes that are usually female, and sometimes it’s the grandmother not the mother. They need to not let these kids watch these things.

I mean I can name them all for you starting with Jerry Springer where the answer to any problem is to hit somebody, start screaming and shouting. Maury Povich with his lie detector paternity test, and there are many others like them. What makes me so mad is that we go on these things and we display the most misogynistic behavior and young kids are watching this. So I hate these reality shows. And you know who’s making money off them? Not us. We get three days in a hotel while they make millions.

We live in a generation where social media is very influential. How important is it for this generation to go beyond just a hashtag and actually get out in the community and do something?

Yea, social media is here to stay. But we have to teach our youngsters responsibility with respect to social media and how to use it. Don’t spend all your time on Facebook, Twitter or the other sites. Get out in the community. Have a good life and do other things. Listen to music and not just hip-hop. One of the big things for me when I was in the public school system in New York is that it exposed me to Ravel’s Bolero. It exposed me to “The Night Watch” painting by Rembrandt. It exposed me to things that I did not know influenced me until decades later. I’m 77 and it was only in the last 10 years that I realized the influence of these things and realized that this is what shaped me. Why would I remember Ravel’s Bolero 60 years later? Or Chaucer’sÂ The Canterbury Tales.