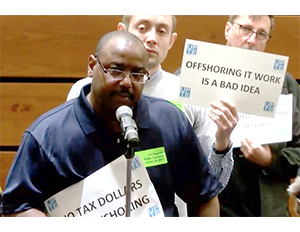 (UCSF employees and allies from other campuses, including Mike Holford, an electronics tech at UC Santa Barbara, challenged the UC Regents' decision to offshore dozens of family-supporting IT jobs.: Image: CWA)

Last week, The University of California fired IT workers, including a number of African Americans, in order to replace them with IT workers from India, charges members ofÂ the University Professional and Technical Employees-Communication Workers of America Local 9119 union.

The UC college system recently partnered with HCL, a global contractor headquartered in India, which places workers in IT positions. UC signed a five-year contract to cut costs by outsourcing IT services and management.

UC San Francisco employees and members of the CWA union are condemning the replacement of American technology workers with lower-paid workers from India. They also strongly criticize both UC and HCL for shipping in H1-B holders, citing the purpose of the H1-B program is to fill highly-skilled talent gaps and not to displace U.S. workers.

“It is clear from the broad opposition within the UC community, Congress, and the public that offshoring good California jobs is counter-intuitive to the mission of the university, and betrays taxpayer trust,â€ said Keith Pavlik, a UCSF employee and member of UPTE-CWA Local 9119, who spoke out at the board’s January meeting.

“At the same time, this puts patients, research, and other private data at risk, outside the scope of HIPAA and other U.S. privacy laws. As stakeholders in the university, we ask that UC President Janet Napolitano and the Regents reverse the decision to offshore UCSF IT jobs, and preserve the jobs of the dedicated professional UC IT staff.â€

There are critics who charge that Silicon Valley takes advantage of the H-1B visa program to hire cheap labor. There is also the concern that doing so, can impact job placement of people of color in the tech industry–which already lacks diversity.

The UC employees protesting also point out that UC San Diego Chancellor Pradeep Khosla and UC Berkeley Dean of Engineering S. Shankar Sastry sit on the board of HCL.

Black Enterprise requested a statement from UCSF, one of the 10 campuses in the UC system. Here is UCSF’s statement on the issue:

In July of 2016, UCSF notified 49 career employees and 30 employees, who had been working on temporary contracts with the university, that they would be laid off at the end of February, as a result of a reorganization aimed at addressing a significant escalation in cost for IT services. These employees carried out certain back-end IT services that would no longer be performed at UCSF, but would instead by undertaken by a contractor, HCL America. Since then, a number of these workers have found new IT jobs, both at UCSF and in the private sector.

This reorganization isÂ an unfortunate but necessary step to rein in IT costs, which have risen steeply.Â The pressure is driven in part by the increased demand for IT services, including the electronic medical record and the use of big data for research aimed at improving diagnostics and care for patients.

UCSF has threeÂ missions. It provides medical care, including to many poor and vulnerable people through MediCal and Medicare, as well as charity care. It does world-class research. And it educates graduate health professionals. Given dwindling state support for education and stagnant federal funds for research,Â UCSF’s health system, known as UCSF Health, is shouldering more of the costs ofÂ UCSF’sÂ research and education,Â and the number of underinsured and uninsured patients is rising,Â making it more important than ever that UCSF Health be financially stable.Â To ensure that patients now and in the future receive care, it is critical that we look at new ways of doing business, including partnering with others when it makes sense.Â UCSF Health is entirely self-sufficient and receives noÂ financial support from theÂ state.

UCSF has been open and transparent with workers throughout this two-year review process, which concluded that it was more economical and secure to partner with specialized vendors on those aspects of information technology that do not require close interaction with research, patient care or education.Â The vast majority of UCSF’s IT services will remain in-house.

Additionally, the college’s representatives said that their “efforts to find these workers jobs continues.” Of the 40 staff impacted, eight have taken internal UC positions; six are targeted and interviewing for UCSF IT positions; five have taken external positions; and at least two are considering other external offers.