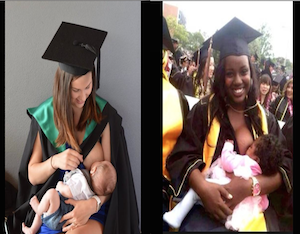 Earlier this year, two photos hit the web both showcasing the beauty of education and motherhood.

Karlesha Thurman and Jacci Sharkey were celebrating successfully completing higher education, but each have experienced different reactions in press and popular culture.

A June 2014 story from Today addresses the issue with a headline that provocatively says that Karlesha’s photo “stirs controversy.” Yesterday, Buzzfeed posted a story showcasing Jacci Sharkey and in an interesting twist, noted her image as “adorable.” How can two images, both having gone viral, and full of pride and happiness have different connotations?

The social media reaction to both parties has been stunning. “I never expected it to go crazy. I thought I’d be really happy if it got 100 likes and then it’s just gone out of control,” Sharkey said to ABC Queensland. “I was proud of the fact that not only did I graduate but that I got to share the moment with the one person who is the most important to me and that is my daughter,” Karlesha Thurman said to today.

With “controversy” and “adorable” as the keywords that readers would notice, it is key to note that Thurman drew negative comments while Sharkey’s was overwhelmingly positive. People believed that Karlesha, who initially posted her picture for Facebook’s Black Women Do Breastfeed, should have covered up. Other comments were much worse.

Thurman, 25, earned her accounting degree from California State University. In her chat with TODAY, she said that she never even wanted attention from the photo because she didn’t believe that people would have an issue with public breastfeeding. “I honestly thought that as a society, people were more understanding to breastfeeding and understood the importance of breastfeeding,” Thurman said.

“It’s not disgusting, it’s not a bad thing, it’s not a negative thing. It’s the best thing for my daughter. More people should do it,” Thurman added. Meanwhile, Sharkey, speaking to ABC Queenland, never had to worry about too many negative reactions to her moment of vulnerability because “there has been a sea of thank-you messages from people”. “It was really heartwarming … you do come across keyboard warriors but it is just nice to see the positive outweighs the negative.”

These photos make news at a period when African American women are experience low rates of breastfeeding among all races and ethnic groups across the United States, according to Dr. Lori Feldman-Winter, a pediatrician at Cooper University Hospital in Camden, N.J.

According to statistics, out of all babies born in the U.S. in 2010, at least 77 percent were breastfed in comparison to 62 percent of Black babies, according to figures from the CDC.

Do you feel that there was any real controversy to these images? Voice your opinion in the comments below.