This College Student Is Ready to Take On Detroit 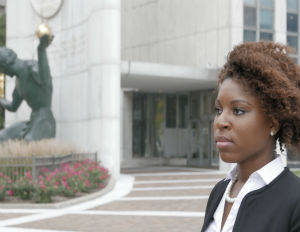 She’s 22. She’s a college senior. And she’s running for mayor of Detroit.

Myya D. Jones expects to graduate this spring from Michigan State University, but she has already announced her bid to run for mayor of a major American city. Talk about a New Year’s resolution–she announced her candidacy Jan. 1, 2017.

A History of Service

In a sense, Jones has been serving the city of Detroit for years. In an article penned for Jopwell, the career advancement platform for students and professionals of color, Jones says that in high school she got involved with BuildOn, a volunteer organization. She then “became passionate about social action and nonpolitical civic engagementâ€ and got involved in community service, working for “organizations like the Greening of Detroit, Gleaners Community Food Bank, and the Boys and Girls Club,â€ among many others.

So it’s no surprise that such a civic-minded young woman would enter politics, although Jones was initially turned off because of corruption in her hometown. It wasn’t until she attended MSU that she realized how politics reaches beyond government.

“The political agenda [affects] almost every important decision-making aspect of our lives, whether it’s applying to college, running for a leadership position of a student organization, or pursuing an internship or job,â€ Jones says. “That’s when I decided that if I couldn’t circumvent the system, I’d join it–and work to change it from the inside.â€

Although she’s young, Jones’s life hasn’t been easy. She assumed responsibility for her five siblings when her mother was disabled by mental illness. Jones herself is bipolarÂ and she’s written about how she’s triumphed over mental illness by taking advantage of free resources. She’s also promoted mental health on her campus.

That may explain why she’s prioritizing access to mental health services on her platform.

The former intern at the U.S. House of Representatives also wants to make sure poor people in Detroit aren’t displaced by the city’s rapid gentrification. She plans to pursue community policing to build bridges between law enforcement and the community. And she’s spoken of developing more programs for the city’s youth and making more recreational centers, parks, and after-school programs available to them.

To learn more about Jones and to support her campaign, visit her website.