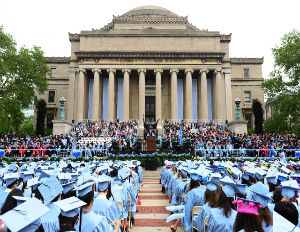 Law school students at Columbia, Harvard, and Georgetown University are urging administrators to delay their exam schedule in light of the recent non-indictment decisions in the Garner and Brown cases that have spurred protests and outcry nationwide.

Many schools have policies in place that allow students to reschedule exams if they observe a religious holiday, suffer from the death of a family member, or experience a medical emergency, making the Garner and Brown cases the first incident in which universitys have considered moving exam dates because of a grand jury’s decision.

In a letter to university administrators, Harvard Law School students called out school leaders for being silent around the issue that’s taking place nationwide.

In a similar letter to school administrators,Â Georgetown University law students wrote a letter urging the option of rescheduling their exams because of the effects of the Garner and Brown rulings, stating, “We, students of color, cannot breathe…. We charge you to acknowledge that Black Lives Matter.”

So far, university officials from Columbia Law School have been very understanding toward students’ feelings and the effect that the Brown and Garner cases may have had on them. In a letter to students, administrators said those who feel their performance will be impaired because of the aftermath of recent events can petition to have their exams rescheduled. Elizabeth Schmalz, executive director of communications and public affairs, tells Bloomberg Businessweek that “To date, all rescheduling requests have been accommodated within the December exam period.”

While some universities are working to address the needs of their students, other university officials and former students are arguing that being able to perform in the midst of social injustice is all part of a lawyer’s job.

One Harvard Law School graduate, Elie Mystal, took to the blog Above the Law: Redline to express her disagreement with students asking for exam extensions.

“Requesting an extension or postponement of exams is the entirely wrong message,” wrote Mystal. “Nobody said it was going to be easy or even fair, but showing up to take your test in the face of this adversity happens to be what is required. It’s a learning experience: how do I excel when the racism is so thick and I can’t breathe? It’s a skill that you might as well learn in school because it will be required of you in life.”