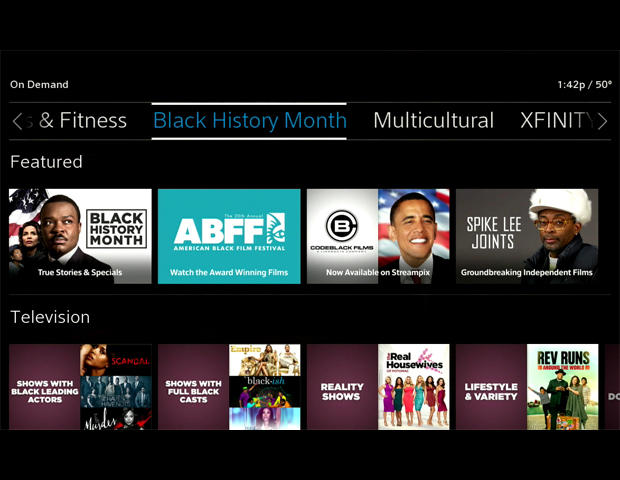 Recently, Comcast announced a Black History Month celebration with a special focus on stories from independent black filmmakers. As a part of the celebration, the cable giant launched a new destination on their Xfinity On Demand platform which highlights a special curated collection of films from the American Black Film Festival (ABFF). The new destination also includes a number of black notable films and television shows for Comcast customers looking to find entertainment from not only their favorite black performers, but also discover content from up-and-coming directors and actors.

“Not every great story that’s been told has a box office opening and sometimes those stories are disproportionately black stories. So what we’re trying to do this year, in celebration of black history month, is to celebrate independent black film using the power of the Xfinity on demand platform,” says Keesha Boyd, Executive Director, Multicultural Consumer Services for Comcast.

Enter ABFF. In honor of the festival’s 20th anniversary, Comcast tapped ABFF to curate a collection of short and feature films that have been exhibited over 20 years at the festival. Boyd states, “When we talk about who has been a pioneer for independent black filmmakers, it’s ABFF. Â They’ve been in this space for 20 years and we want to support them in celebrating these films.Â We partnered with ABFF to do what the festival does–toÂ bring awareness and exposure to new black filmmakers and new content starring up-and-coming African American actors.Â We can use the power of our platform to provide the ability for people to enjoy and consume content that they might not find elsewhere.”

In addition to the ABFF collection of films, Comcast sponsored an opportunity for ABFF to create new content, through a series called For the Love. Directed by three-time ABFF winner Alton Glass, the 4-5 minute segments feature stars such as: Eric LaSalle, Mara Brock Akil, Salim Akil, Salli Richardson-Whitfield, Robert Townsend, Chris Spencer and Elise Neal. This series will be available for free to Xfinity TV customers via Xfinity On Demand and will also be accessible for free to all consumers viaÂ Xfinity’s Celebrate Black TVÂ website for the month of February.Â “We also get the opportunity to help support the creation of content and conversations around the importance of black storytelling and use the power of our platform in over 21 million homes,” says Boyd.

“I salute Comcast Xfinity in its commitment to providing this platform for black artists and storytellers. I am grateful for the opportunity to showcase compelling films that premiere at the American Black Film Festival to a broader national audience,â€ stated Jeff Friday, ABFF founder.

The new destination will be accessible to all Xfinity TV subscribers from the main menu of Xfinity On Demand, and will feature a range of TV collections highlighting shows with “Black Lead Actors and Full Cast,â€ “Reality Shows,â€ “Talk Shows & Clipsâ€; a variety of movie collections such as “Faith & Family,â€ “Comedies,â€Â  “Documentariesâ€ and “Films By Black Directorsâ€; plus music categories including “Hip-Hop,â€ “R&B Soul,â€ and “Reggae.â€ The Xfinity On Demand destination also offers quick and easy access to networks like BET and TV One.Â Throughout the month, Xfinity will also offer several other short-term collections of programming for Black History Month, including:

All programming will be accessible from the “Black History Monthâ€ folder under the Xfinity On Demand main menu.