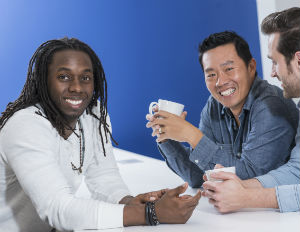 Comcast NBCUniversal continues to be a game changer, shaping the delivery of content and entertainment to a diverse global audience.

It also is the first and only media and tech company to be inducted into the Billion Dollar RoundtableÂ (BDR), joining 21 other U.S.-based corporations in this exclusive group, which spends at least $1 billion with tier-one minority and female-owned business enterprises. BDR members, who cut across a wide range of industries, drive and develop programs to help black businesses achieve that often elusive tier-one status, from direct suppliers to original equipment manufacturers.

Comcast NBCUniversal was named one Black Enterprise‘s “40 Best Companies for Diversity” and “Top 35 Companies for Supplier Diversity.” Its supplier diversity program is designed to promote, increase, and improve the participation of diverse businesses within its corporate supply chain.

“Comcast NBCUniversal’s commitment to diversity and inclusion is second to none; however, it always helps to be able to exchange information and ideas with others who share in that commitment. We push each other so the collective group becomes better,â€ says Ajamu M. Johnson, executive director of Supplier Diversity and Strategic Procurement for Comcast Cable and NBCUniversal. “We are honored to be active members of the Billion Dollar Roundtable.Â  Our involvement provides another opportunity to share best practices with some of the most impactful and inclusive corporations and leaders.â€

Members of the Billion Dollar Roundtable

The Billion Dollar Roundtable was created in 2001 to recognize and celebrate corporations that achieved $1 billion in spend with minority and woman-owned suppliers. In April 2005, the Roundtable consisted of 12 companies. Â Three more companies were inaugurated in 2008; Toyota, Hewlett-Packard, and Procter & Gamble. That brought the total of companies with $1 billion in diversity spend to 15. The BDR inducts new members bi-annually.

In addition to their procurement dollars, the BDR promotes and shares best practices in supply chain diversity excellence through the production of white papers. In discussions, the members review common issues, opportunities, and strategies. What’s more, the BDR encourages corporate entities to continue growing their supplier diversity programs by increasing commitment and spending levels each year.