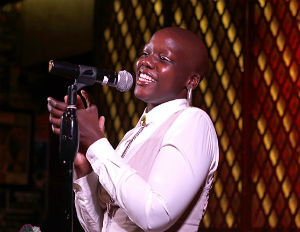 Being a black woman in the comedy world is no easy task. Being a black business woman not only ups the ante, but has pushed Okeyo to do some deep soul searching, so that her message, her medium, and her money could support her mission.

BlackEnterprise.com caught up with Okeyo on the eve of the Sisters of Comedy’s Broadway debut.

BlackEnterprise.com: How did Sisters of Comedy come about?

Okeyo: Sisters of Comedy is my flagship comedy show–the only all-black women comedy show at any of the top comedy clubs in NYC. We spent the past year and a half at Gotham Comedy Club and are now headed to Caroline’s on Broadway. In both venues, I believe I am quite literally one of a kind in terms of who I am and what I do. After years in the non-profit sector, trying to do “good” like so many young professionals with expensive and expendable liberal arts education, I decided to do and live for what makes me happy.

Building a career in comedy and entertainment comes with a lot of financial insecurity due to unsteady and unstable pay. How did you support yourself?

Throughout my adult life I usually maintained more than one job, even if one job was full-time. In a way, in addition to paying the bills, I must have been searching. At one point I started a part-time job at a comedy club and maintained that position on and off for several years. But once I decided to do only what makes me happy and live according to what makes me happy, I realized laughing, telling jokes, and hearing jokes makes me happy. However, the do-gooder in me wanted more than a career as a stand-up comedian. I decided to write and produce first, and pursue a performing career only after carving out a space that I, as a black African woman, could comfortably perform in on my own terms. Furthermore, I wanted to create a space where black women both on stage and off could feel an emotional release; a supremely positive environment where I could provide people with a joyous memory for their day, week, or year. In the bigger picture, Sisters of Comedy is about women (and men) of all stripes feeling comfortable in their own skin, and, above all, laughing their cares away. After nearly two years of building up Sisters of Comedy, I can finally explore my creative identity as performer, in addition to writer/producer.

What’s the business structure for your ventures?

Sisters of Comedy is the mainstay of a number shows that I produce to both entertain and expand minds. As my flagship showcase, SistersÂ is a platform that I have many goals for, one of which is to tour it across the country. I’m the sole proprietor of all comedic creations like my three-month run of Comedy n’ Waffles (a diverse, top-notch showcase for Harlem audiences featured in TheÂ New York Times and Time Out New York) at Ginny’s Supper Club that ran from August through October, 2015. I have plans for another such limited-run showcase in Harlem this spring/summer. I also collaborate with wonderful non-profit organizations that I feel are truly doing their part to better the world. For instance, I’m working with both Equality Now and The Equal Rights Amendment (ERA) Coalition on comedy shows to promote gender equality, albeit with a hearty laugh.