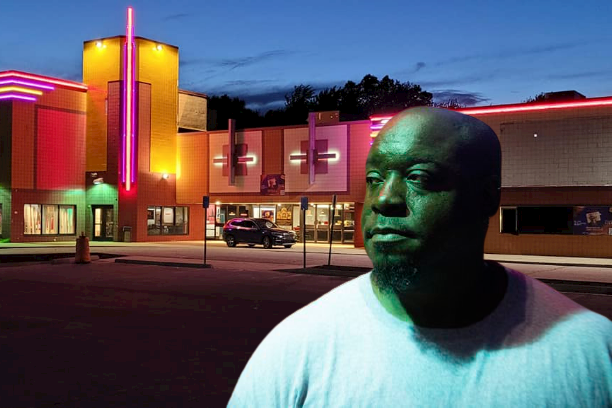 Michigan’s first Black-owned television and movie studio is on its way to the state’s capital city, Lansing.

Amaru, who only goes by one name, said a number of events inspired him to open the studios, including the death of George Floyd and the COVID-19 pandemic.

“How can I bring back my job and others some jobs?” Amaru, 47, said. “Hope was the number one thing that came up and doing away with the despair that’s happening around, especially with our youth.”

The professional entertainer hit the jackpot when he secured the 27,000-square-foot lot. He felt it could provide all he needed for the film and audio production process.

“We lucked up and got one building to do everything we want to do,” Amaru said.

Amaru and the studio’s small staff, along with a handful of volunteers, are working to revitalize the building, which sat vacant since the cinema’s closing in 2014. Screens inside the place were cut and there was shattered glass and broken bottles on the second story.

The team is working to remove debris, install new screens, stages, and technical support. Michael Nathan, a producer and director, is among those helping to bring Greenwood District Studios to life.

“Good things take time and if you’re willing to sacrifice and work for it, it’ll happen no matter what,” he said.

The space is expected to be complete by the end of next year. When it’s ready, it’ll include six studios, a state of the art editing bay and office space.

While the production space is under construction, the studio opened its comedy club in September called Funny Is Funny. The club is used to give local talent a chance to shine. It has open mics on Tuesdays and professional comedic performances on the weekends.

“It may not be about me, it may be about somebody that comes along that I give him an opportunity to blow up,” Amaru said. “It might be somebody that has yet to come that might be that spark.”

For Amaru, someone who’s been in the entertainment industry for 25 years, creating a space for artists to explore their craft within the community is important.

The studio is named after Tulsa, Oklahoma’s Greenwood District or “Black Wall Street,” a district of successful Black-owned businesses burned down by an angry white mob in 1921. Amaru plans to display images of Greenwood District throughout the space. Each studio will be named after something destroyed in the Tulsa Race Massacre.

“We wanted to combine the old with the new so that the old would never be forgotten,” Amaru said.