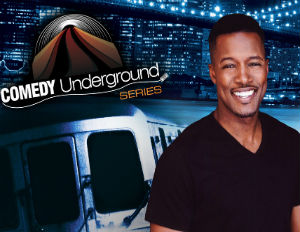 Flex Alexander, actor, comedian and star of OWN’s docu-seriesÂ Flex & Shanice,Â along with aÂ new line-up of stand-ups, is set to take the stage for the Comedy Underground Series atÂ Alex Theater on Friday, July 17, 2015.

[Related: Oprah and Ava DuVernay Team Up for OWN Series]

“I started stand-up in 1989, then I left and came back to it–so this [is] a rebirth for me and an honor for me to take the stage. It’s a return to my first love, and I’m so excited to get back to it. Â Being real is my point of view, so fans can expect to have a good time. I’ll be talking about everything from my family, marriage, and finances to politics,â€Â Alexander said exclusively to Black Enterprise.

“Comedy is like food to the soul. Whenever I hear a great comic, I am sure to spread the word. It’s a beautiful thing when one has the ability to alter someone’s mood and their entire state by creating laughter. Comics who are unafraid to share what moves their souls in a relatable way, are usually the funniest to me. Music and comedy go together hand in hand; likewise I am excited about bringing the music to the Comedy Underground Series,â€ said Mc Lyte.

Following the comedy show, there will be an invite-only, industry reception for VIP’s and performers. “Comedy is universal medicine, as the power of laughter to touch transcends across the world.” The Comedy Underground Series looks to break fresh new faces and re-introduce season veterans, who are currently absent from mainstream television and media. The series is shot with segments featuring a docu-style format, so we can delve into a comic’s journey on the road to stardom.

“I look to have this series become a funny and thought-provoking stand-up comedy show with a twist of ‘real life,’ as a comedian’s path is not always easy but they do their best every night to bring laughter where there is a need. I salute comedians, as they are examples that there is always a silver lining.â€ says Comedy Underground creator Angela White. “The Comedy Underground Series is giving back through their gift of merriment to 501c3 nonprofit, DreamWatchers, a Los Angeles-based organization that helps underprivileged children receive training in the arts. Dream Watchers prepares gifted kids between the ages of 10—18 for a professional career, by mentoring, empowering and infusing a strong sense of morality and integrity into their young lives. Through this organization, they learn a code of conduct that includes respect for each other, their gifts, God and the world.”

Although the event is free and open to the public, guests are required to submit their reservation online at The Comedy Underground Series to attend the live taping.