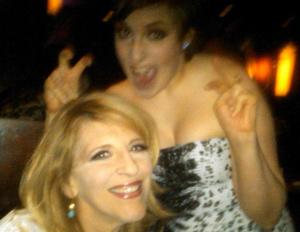 Lisa Lampanelli, the self described “Loveable Queen of Mean” may have finally crossed the line after tweeting a photo of herself and Lena Dunham, Â creator of HBO’s hit series girls and including a racial slur.

While attending an event, Lampanelli tweeted a photo of herself and Lena Dunham. She added the caption “Me with my n**** @LenaDunham of @HBOGirls – I love this b****!!” to the photo, sparking outrage all over social media.

The stand-up comedian and insult comic, who was recently featured on NBC’s “The Celebrity Apprentice”, has made a career of incorporating ethnic and racial minority insults, slurs and stereotypes into her comedy routine.

When interviewed in 2009, she was asked about her penchant for racist jokes Â & stated “I can get away with it because I’m a nice person, I have a warm personality, my intention is good behind it. The thing is, people sense when you have the least bit of anger or hate towards a group —— that’s why you never make fun of people you don’t like.”