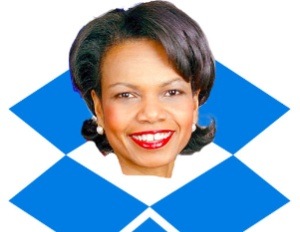 Drop-Dropbox.com used this picture of Dr. Rice in its manifesto against her appointment to the company's Board of Directors.

On April 9, Dropbox announced a controversial appointment to their board of directors: former U.S. Secretary of State under the George W. Bush Administration, Dr. Condoleezza Rice.

Someone didn’t take the news lying down, and has erected the “Drop Dropbox” site, which demands that Dr. Rice step down from her position as a board member.

Dr. Rice is no stranger to the online file storage company as her consulting firm, RiceHadleyGates, has been providing management advice for Dropbox for about a year, according to Bloomberg Businessweek.

The site’s grievances with the choice lay in Rice’s past actions under the Bush Administration, including her approval of waterboarding as a form of torture, and her intimate involvement with the decision to start the Iraq war.

The manifesto also brings up Dr. Rice’s association with wiretapping, and how it could affect Dropbox’s credibility. Rice was responsible for personally approving wiretaps of the UN Security Council.

“Choosing Condoleezza Rice for Dropbox’s Board is problematic…and invites serious concerns about Drew Houston and the senior leadership at Dropbox’s commitment to freedom, openness, and ethics,” the site says. “When a company quite literally has access to all of your data, ethics become more than a fun thought experiment.”

The site lists a few alternatives to Dropbox and its file-syncing service, saying “Dropbox is not a terribly complex product to replicate. There are a number of fantastic alternatives, some of which are even fully encrypted and open-source.” It’s unclear who created the protest site.

The San Francisco-based company announced on Wednesdsay an Android and desktop version of its popular “Mailbox” email app, as well as a new photo-sharing app, Carousel. The company is also relocating from its home in San Francisco to New York City this year.

Many Twitter users stood behind the protest site, showing their support for the resignation of Dr. Rice.

Great. Looks like I need to find a @Dropbox alternative. http://t.co/pSOqQ0874H #DropDropbox

I don’t normally bore you with politics, but if Condoleezza Rice joins Dropbox, I’ll have to #DropDropbox (paid acct) http://t.co/mZnmA2dKgV

Black Enterprise reached out to Dropbox for comment on the issue, and will update the post accordingly.