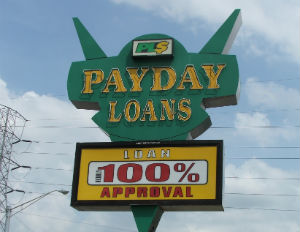 “I convened this group because it is important that the debate over payday lending includes the moral objections that it raises for people of faith. The voices of industry, academia, and regulators are often heard in Congress, but too often we fail to engage faith-based community leaders, who are actually working in the communities where payday and other small-dollar lenders are most pervasive,â€ said Congresswoman Waters.

Payday loans are short-term, high interest rate loans that are typically to be repaid on the borrower’s next payday. The typical payday loan has an annual percentage rate ranging from 391 to 521%. They don’t require a credit check, making them an attractive option to people struggling financially. Usually the borrower writes a postdated check to the lender.Â  If the borrower does not come in and pay the loan in person, the lender has the option of cashing the check. If the check bounces, the borrower incurs bank fees and costly penalties from the lender. Many borrowers take out additional loans to cover the short fall.

According to the Center for Responsible Lending, payday loans generate $27 billion in annual loan volume, and 12 million Americans are trapped every year in a cycle of 400% interest payday loans.

In addition, Pew Research finds that 12% of African Americans have used payday loans.Â

As a follow-up to the event, Congresswoman Waters announced that she will be sending letters to some of the country’s most notable endowments, including the Harvard Management Company, the University of California’s Board of Regents, and Cornell’s Office of University Investments — as well as state retirement plans in New York, Illinois, Colorado, Virginia, and Montana — calling on them to begin to take steps to divest their interests in Ace Cash Express; one of the country’s largest payday lenders.

“It has recently come to my attention that each of your respective retirement systems or endowments made substantial investments in 2005 in JLL Partners Fund V, LLC.Â  Assets that were invested in the fund were subsequently used to acquire Ace Cash Express, Inc. in October 2006,â€ said Congresswoman Waters in a letter to officials at the endowment and retirement funds.

“We all have a responsibility to ensure that our communities do not support private equity firms that own or invest in payday or other small-dollar lenders,â€ the Congresswoman stated.

18 states and the District of Columbia prohibit payday lending. Proponents of payday lending, however, argue that they are providing a necessary lending service to communities that big banks refuse to serve in this way.