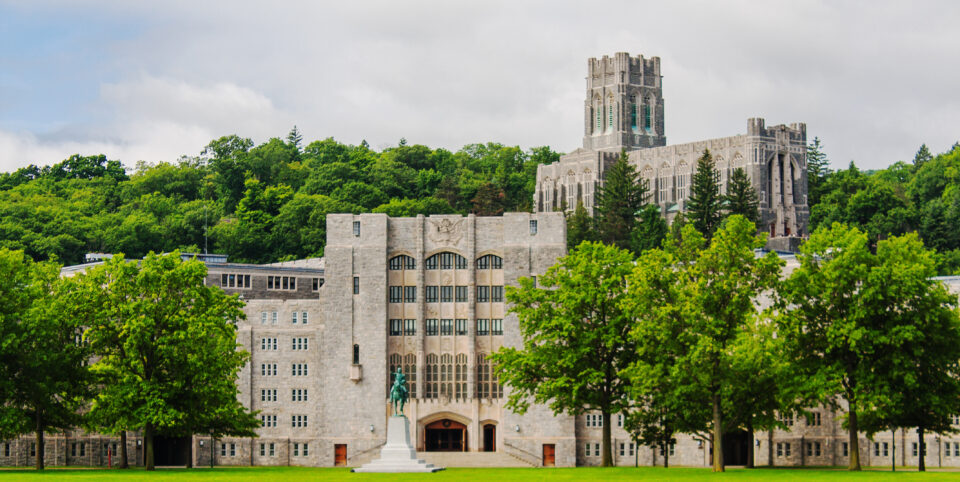 (Image: iStock / fdastudillo) West Point, NY, USA - June 06, 2009: The campus of West Point as seen from The Plain - a grand lawn in the center of the West Point Campus, West Point Chapel in the background.

A new report from the Congressional Naming Commission (C.N.C.) says the United States Military Academy in West Point, New York, has a plaque with Ku Klux Klan written on it and a hooded figure displayed at the entrance to its science center known as Bartlett Hall.

The marker, which displays the words Ku Klux Klan, is part of a larger piece of artwork appearing at the entrance of Bartlett Hall. The artwork, dedicated in 1965, was “originally dedicated to West Point graduates who served in World War II and Korea,” according to CNN.

The marker was part of 12 assets the Commission found with Confederate name associations on West Point’s campus. Another three were found at the U.S. Naval Academy.

Confederate veterans formed the KKK after losing the Civil War and are still considered a hate group by many. According to the Southern Poverty Law Center, the number of KKK groups has declined over the last two years due to COVID-19 and continuous infighting.

The Commission is now urging the Secretary of Defense “to address DoD [Department of Defense] assets that highlight the K.K.K.” and “create a standard disposition requirement for such assets,” the report states.

“The marker falls outside the remit of the Commission; however, there are clearly ties in the KKK to the Confederacy.”

According to a statement, the U.S. Military Academy’s Public Affairs office acknowledged they have received the report and are reviewing its recommendations.

“We are reviewing the recommendations and will collaborate with the Department of the Army to implement changes, once approved,” the statement shared.

“West Point’s mission is to develop leaders of character who internalize Army Values, the ideals of Duty, Honor, Country, and the Army Ethic. As a values-based institution, we are fully committed to creating a climate where everyone is treated with dignity and respect.”

The Commission was established last year as part of the 2021 National Defense Authorization Act, which former President Donald Trump vetoed before he left office. However, Congress delivered its only veto override approving the legislation.