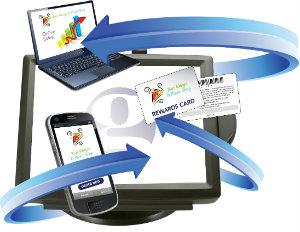 This article was originally published in Voice of America in September 2015. Read more at VOAnews.com.

A virtual reality viewer that works with a smartphone and motion-tracking gloves that let workers scan inventory while management monitors production were just a couple of the new gadgets on display at a tech developers conference sponsored by Intel this week in San Francisco.

Such gadgets use embedded technology that connects them with other devices. Doug Davis, a senior vice president at Intel, said products like the VR viewer that result from such engineering “are the ones that as consumers we see, and those are kind of exciting.â€

But examples of technology use such as that found in the motion-tracking gloves are going to change the way businesses work, he said.

“We’re starting to see a big impact in areas like industrial or manufacturing,” Davis said. “You’re now connecting machines in factories and analyzing data in ways you never were able to before.â€

The work gloves were developed by ProGlove, a Munich startup. Like other companies, it’s moving its applications onto the manufacturing floor.

“We mainly focus on automotive manufacturing and logistics,â€ said ProGlove’s Sebastian Petruch. Such industries, he said, place a premium on increasing efficiency.

The Ebola crisis inspired the invention of a portable system for storing patient records at isolated clinics in Africa. Volunteers from Google and other companies helped out, partnering with the medical charity Doctors Without Borders.

Hardware engineer Ken Krieger was part of the team that developed aÂ  hand-held server that connects wirelessly to a doctor’s tablet computer. He said the server, which stores the data, “can be sterilized – dunked in chlorine to kill the Ebola – and would support being used in very rugged, really hostile environments for technology.â€

Behind-the-scenes technology can keep track of temperatures in our homes and climate conditions in a farmer’s greenhouse.

Anthropologist Genevieve Bell, who leads a team at Intel that studies people and technology, said that embedded technology is becoming more common, and “in the future … we will have a whole lot of things in our world, in our homes, in our businesses, in our cars that are connected.â€

The result, she said, is that in such endeavors as commuting, shipping and producing energy, embedded technology is increasing efficiency.

Attend the Black Enterprise TechConneXt Summit at the Santa Clara, California, Hyatt Regency from Oct. 12—13, 2015.Â  It will present a unique, unparalleled opportunity to make connections among the best and brightest in the African American tech community–from Silicon Valley and beyond. At TechConneXt you will learn the secrets to navigating the Silicon Valley community, discover opportunities with tech companies, find funding sources for your business, and connect with established tech leaders. If you are a part of the tech community or one of its many stakeholders, you simply cannot miss it! Register today at www.blackenterprise.com/techconnext.