Conquering the Pizza Industry with Her Robot Army 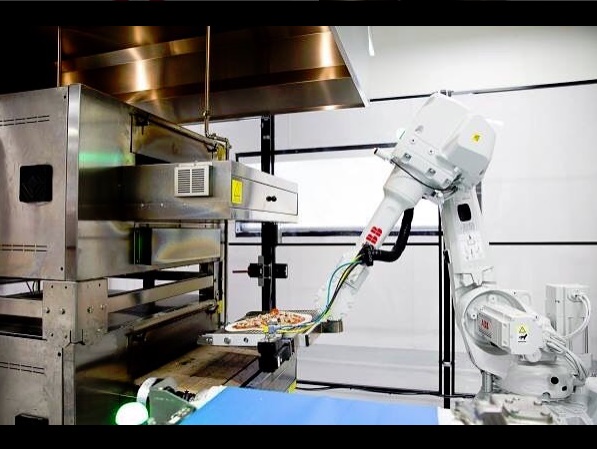 “Why don’t we just re-write the rules–forget about everything we learned about running a restaurant?â€ says Julia Collins, the co-founder of Zume Pizza and former CFO of Mexican-themed restaurant, Mexicue.

Her recipe for beating top pizza chains, such as Domino’s and Papa John’s? Robots.

Collins, along with her co-founder Alex Garden, launched a Silicon Valley-based pizza place with no storefront, just delivery–and enlists the aid of robots in its kitchen to make fresh, artisanal pizza pies.

Zume opened for business in June. Today, the company averages 200 pizza deliveries per day, with its blended human and robot workforce.

How a Robot Makes a Pizza Pie

“Customers place an order [though the website or the iOS app]. Then, the first step is to stretch the dough,” says Collins. The dough is stretched exactly to 14.5 inches by a human, then it is placed on an assembly line, where Zume’s internal technology system monitors the progression of the dough down the line.

The next step is placing sauce. “Two robots do the sauces. The first robot is named Giorgio, and the second is Pepe,â€ Collins says.

Once the robots apply the sauces (but not on white pies), another robot, named Marta, spreads the sauce. “Marta looks a little bit like a spider with three arms,â€ explains Collins. The robot’s arms end in a flat ladle shape designed to spread the sauce exactly half an inch in diameter on the pizza crust.

Cheese and toppings go on next, which is work done by human hands. However, Collins says that by the first quarter of next year, this work too, will be done by robots.

The human pizza toppers will “go on to do other tasksâ€ in the company, “depending on what their interests are,” Collins says.

The pizza is placed into an 800 degree stone oven by a powerful, manufacturing plant-type robot named Bruno. Once the pizza is half baked, the pies are loaded into mobile ovens; customized delivery vans that will finish cooking the pies within four minutes of being delivered to a customer.

“We realized we could automate more of the unsafe repetitive tasks of operating a kitchen using flexible, dynamic robots,” says Collins.

The Benefits of Automation

Collins says that embracing automation allows her company to create quality pizzas at a competitive cost.

Zume employs 56 human workers, who do everything from software engineering to pizza delivery. Collins says that automating has allowed them to offer the human workers free vision, dental, and health insurance, as well as shares in the company.

“The humans that work at Zume are making dough from scratch, working with farmers to source products recipe development–more collaborative, creative human tasks. [We have] lower rent costs because we don’t have a storefront; delivery only, and lower labor costs. We reinvest those savings into locally sourced, responsibly farmed food.”