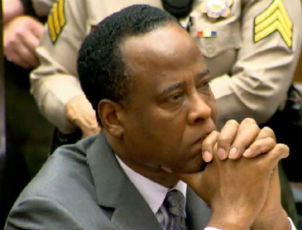 Dr. Conrad Murray, who was found guilty of involuntary manslaughter in the death of pop icon Michael Jackson, says that his jail stay is killing him.

TMZ obtained a recording of a phone call between Murray and a friend in which he said he fears he’s suffering from deadly blood clots in his legs.

Doctors who examined Murray after his complaints say there is nothing wrong with him, despite his protests.