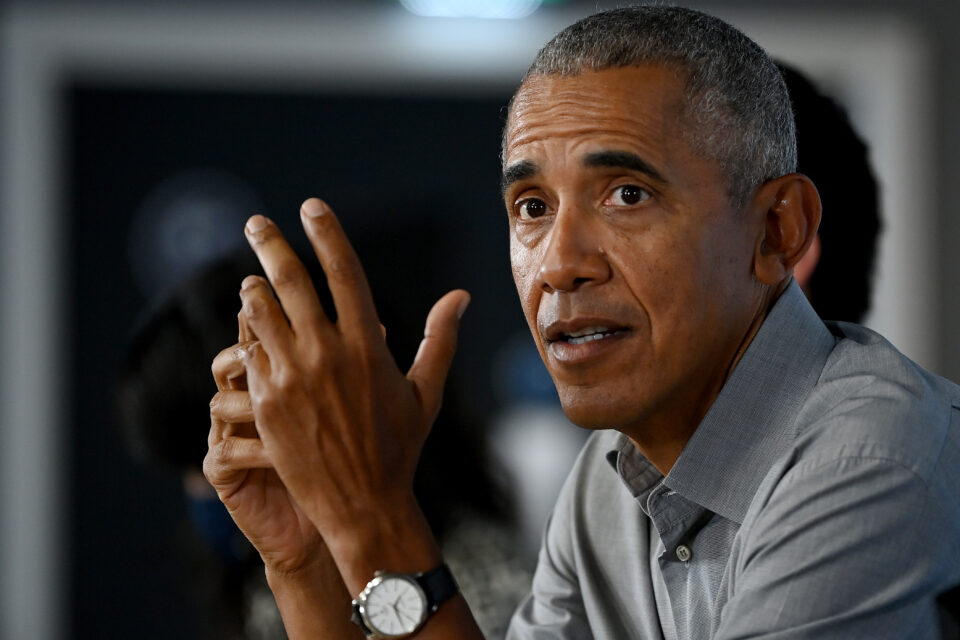 GLASGOW, SCOTLAND - NOVEMBER 08: Former US President Barack Obama gestures as he speaks during a round table meeting at the University of Strathclyde on November 08, 2021 in Glasgow, Scotland. Day Nine of the 2021 climate summit in Glasgow will focus on delivering the practical solutions needed to adapt to climate impacts and address loss and damage. This is the 26th "Conference of the Parties" and represents a gathering of all the countries signed on to the U.N. Framework Convention on Climate Change and the Paris Climate Agreement. The aim of this year's conference is to commit countries to net-zero carbon emissions by 2050. (Photo by Jeff J Mitchell/Getty Images)

The Black-owned construction firm working on the project, Lakeside Alliance, has offered $100,000 reward for any information that leads to the responsible party. They halted construction on the site after notifying the police so that investigators could interview employees.

“We have zero tolerance for any form of bias or hate on our worksite,” said a representative from Lakeside Alliance. “Lakeside Alliance remains committed to providing a work environment where everyone can feel safe, be their best self, and is treated with dignity and respect.”

The Obama Foundation released a statement that said that leaving the noose at the site was an “act of cowardice.”

“This shameless act of cowardice and hate is designed to get attention and divide us. Our priority is protecting the health and safety of our workforce. We have notified authorities who are investigating the incident.”

Governor JB Pritzker also released a statement denouncing the hate-filled symbol found at the site.
“Hate has no place in Illinois. The noose is more than a symbol of racism, it is a heart-stopping reminder of the violence and terror inflicted on Black Americans for centuries,” he wrote. “I condemn this act of hate in the strongest possible terms, and the state of Illinois will make all needed resources available to help catch the perpetrators.”

I condemn this act of hate in the strongest possible terms, and the state of Illinois will make all needed resources available to help catch the perpetrators.

Chicago Mayor Lori Lightfoot also released a statement after the noose was discovered at the construction site and said the guilty party would be held responsible.

“Racism and racist symbols have no place in Chicago, and those inciting it will be held responsible for this repulsive act,” said Lightfoot.

According to USA TODAY, the Chicago Police Department is investigating the incident.

The Obama Presidential Center will feature an activity center, museum, library, plaza and forum. The center is scheduled to open in 2025.