Another young Black life has been brought into this challenging world. Controversial conservative and avid Trump supporter Candace Owens has reportedly become a mother to her “first born son.”

Owens took to Twitter to tell the world “It’s true what they say— the whole world stops when your child is born.” She displays a photograph of a baby boy. Daily Mail reported that she had previously announced her pregnancy on Aug. 28 on Instagram.

It’s true what they say— the whole world stops when your child is born.

“Children are a gift from the Lord; they are a reward from him”
-Psalm 127:3 pic.twitter.com/vAOsO7CZoW

The often critical Owens didn’t lose a step during the end of her pregnancy as she didn’t take a low-profile approach before giving birth, as she often commented on the recent Pro-Trump riot that took place at the US Capitol earlier this month.

It is laugh out loud funny to me that people are still pretending @JoeBiden had more support in this country than @realDonaldTrump.

This country belongs to patriots & they stand firmly behind Trump.

My hope is that all violent agitators are arrested and their names are revealed publicly.

Call it a hunch, but my guess is there are still ANTIFA thugs in the mix.

Democrats are literally beginning to sound like ISIS.
“Recite the Quran or get your head chopped off, now!”
Absolutely psychopathic. You will not make President Trump and his 75 million voters magically disappear or cower in fear. https://t.co/S4fFTQZZB5 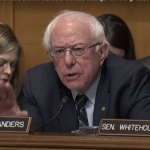 FacebookTwitterYoutube
← This Group Is Leading The Charge To Provide COVID-19 Support For Black-Owned Businesses In Oregon ← Bernie Sanders: Republicans Will Win 2022 Midterms If Democrats Don’t Act Aggressively On Stimulus
×
'