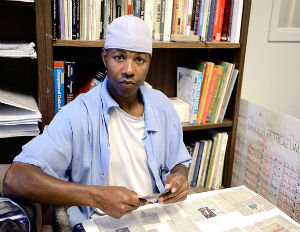 A MarketWatch (Wall Street Journal) article about an inmate at California’s San Quentin prison bears similarities with lead character Andy Dufresne in the Stephen King novella, “Rita Hayworth and Shawshank Redemption” and the hit movie the “The Shawshank Redemption.”

The Wall Street Journal says 35-year-old Curtis Carroll, who is African American and doing 54 years to life for murder, is now being called, “The Oracle of San Quentin.” He’s been selecting stock and giving winning investment tips at California’s oldest and best known correctional institution.

According to the feature, Carroll has built a following among his fellow prisoners by teaching them how to play the market, “stay out of debt and draw up a budget.”

What’s more incredible is that he has spent his adult life behind bars and when he started serving out his sentence for murder, Carroll couldn’t read. He tells the Wall Street Journal’s Catey Hill, “Being illiterate is like being in a bubble. Being uneducated affects the way people move in life, it affects what they become in life.”

He also tells the Journal his lessons are designed to help inmates avoid hopelessness and crime. Today he’s a teacher in one of San Quentin’s programs, passing along personal finance tips, which include, “Saving to build a nest egg, create an in-case-of-emergency fund;Â controlling costs by not allowing monthly expenses to exceed monthly after-tax income;Â not borrowing money you can’t repay; andÂ diversifying your assets.”

According to the publication, Carroll reads the Wall Street Journal every day. He also reportedly invokes Warren Buffett in conversation as one of his idols – hence the nickname, “Oracle of San Quentin.” His Buffett quotes reportedly include, “Be greedy when others are fearful, and be fearful when others are greedy.” He also says the best opportunities to profit come when “people panic about stupid stuff.â€

Journal also reports that Carroll’s interest in investing goes back more than a decade, but his influence has grown since 2012, when he was transferred to this prison. He has turned dozens of people into “clientsâ€ who take his advice— including non-inmates who volunteer at the prison.

When he’s thinking about investing in a stock, he tells Hill, “Psychology runs 70% of the markets. Investors play follow-the-leader – if they didn’t, we wouldn’t have the 1%.”