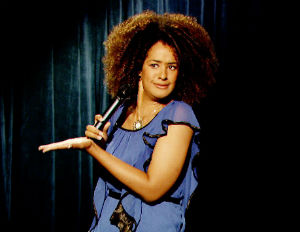 35-year-old Calise Hawkins of Oxygen’s new docu-series Funny Girls, a show following the personal and professional lives of up and coming comics’, is more than just your typical jokester. Â Working as a stand-up comedian, writer, and full time mom she’s managed to maintain the game of being funny, making comedy her profession for more than ten years.

Oxygens, Funny Girls premiered April 7th providing yet another platform for talented women to thrive, and although Hawkins says shes not entirely sure how she landed the new big gig she thinks it may have derived from one of the many relationships she’s built over the years

Her and her fellow cast member and friend, Yammanieka Saunders, have known each other for at least a decade and frequently appear on screen together, sharing a chemistry thats hilariously apparent.

“Going into this show with Yammanika was such a stress relief, because we’ve both gone through a lot in our careers and we both feel like we’d like to break through, so having her with me was just fun.â€

Though, Hawkins has tasted success she makes it clear, that it came with no silver spoon. She tells her story of working her way up as a barker outside bars, persuading people to come in, while she tried to earn five minutes on stage. Hawkins says the downside is, going from barking at the door to telling jokes on stage.

Knocking down the doors to Hollywood can be challenging especially when you’re a women of color in a white male dominated industry, but despite the majority, big and small screens alike, are showing viewers increasingly more women of color. From complex characters like Mary Jane (played by Gabrielle Union) in BET’s Being Mary Jane to social media favorites, like Annalise (played by Viola Davis) in How to Get Away With Murder, it seems black women’s talents are finally being recognized rather than marginalized.

But Hawkins’ talents don’t begin or end with her uncanny ability to make people laugh, she’s also a dedicated full time mother to her eight year old daughter whom she adores. As a single mother, and aspiring big time comedian, Hawkins has canceled shows, shifted schedules and rearranged her life to maintain motherhood and to make her dream come true.

While pursuing her career as a comedian, she’s Â gone to great lengths to ensure her and her daughter’s well-being, normalcy and happiness, saying that she gets the most joy out of the moments when she is making her “tiny personâ€ feel like her life is meaningful.

You can catch Funny Girls on Oxygen Tuesdays at 9/8pm central. To learn more about Calise and the show visit Oxygen.com