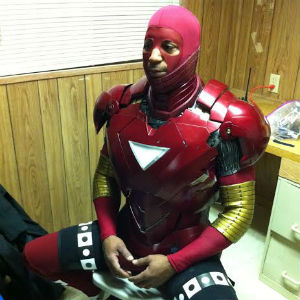 Fontenot as a stuntman in Ironman (Image: Fontenot)

Clay Donahue Fontenot, is one of the most sought-after stuntmen in Hollywood. He embarked on the journey to career stardom 23 years ago, after leavingÂ Florida for California.

An award-winning stuntman, Fontenot has worked as a stunt double and stunt coordinator for some of the biggest names in the industry, including Denzel Washington, Jamie Foxx and Wesley Snipes.

Stuntmen and stunt-women typically perform stunts or “gags” intended for use in either a motion picture or dramatized television. Their industry is crucial for motion picture production. Most traditional film insurance packages will not cover stunts or gags. Actors that commit to a major movie project are required to sign insurance policies that govern and restrict their activity for the duration of the filming. If there are any mishaps on set, production shuts down. As imagined, it increases production overhead, driving up costs.

That’s why stuntmen are required—to do the heavy lifting. They get paid to risk personal safety.

BlackEnterprise.com caught up with Fontenot while he took a few minutes off from filming the latest installment of the “Fantastic Four” franchise in Baton Rouge, Louisiana to discuss breaking into and making it in the industry, the dangers working in the shadows, behind the action and the rewards.

What are you working on now?

I’m working on the latest “Fantastic Four” movie. We are shooting in Louisiana. I’m the stunt double for Michael B. Jordan who is playing Johnny Storm, the Human Torch. Yes, we are introducing a black, Johnny Storm to the world. That’s all I can divulge right now. I can’t really give any other details, except to say that it is going really well.

How do you prep before starting on a shoot?

We usually get called in depending on how big the gag is or how big the show, to prepare and rehearse. You’ve got to make sure you’ve done your homework. Especially for the bigger, more dangerous gags. Smaller stunts usually require you to run around the corner and get shot and fall down. But for some of the car flips and high wire gags that involve accuracy and placement and other things that need attention-to-detail, you’re given mandatory rehearsal times. After the stunt is approved by the highers ups, on shooting day you just go into your mind set and ramp up your focus and make sure you are on your mark.