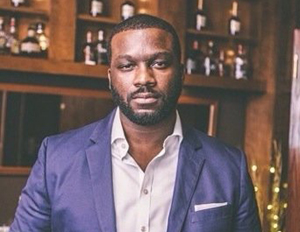 Want to succeed in life and business? Don’t wait for anyone to give you anything— especially a job. A chance opportunity led Rashad Drakeford to follow this advice, pushing him into the opportunity of his dreams. Now, as the director of integrated marketing at Revolt, the Hampton University alum is leading all marketing efforts at the “real-time, socially connected television networkâ€ founded by mogul Sean “Puffyâ€ Combs and MTV veteran Andy Schuon. As a student at the “School of Puff,â€ Drakeford is sure to know a few things about the hustle. Not to mention, he gets to witness this firsthand, as the ‘bad boy’ is hands on in day-to-day activities for the network.

With an impressive career resume that also includes the Madison Square Garden Company and IMG, Drakeford is clearly on his way to becoming one of the industries top ‘go-to’ executives. Drakeford talked to BlackEnterprise.com recently and discussed the challenges of his role, secrets to the influence behind the REVOLT brand, and what motivates him each day.

BlackEnterprise.com: How did you first come to get your position with Revolt?

Drakeford: I first heard about Revolt when a friend of mine sent me their YouTube sizzle video back in AprilÂ 2013. I was absolutely blown away and inspired by the ambition and boldness of its mission to elevate music, artists and culture across a billion screens in five years. Â I kept hearing about REVOLT over that summer, peaking my interest even more so I just sent a cold email to the head of marketing and received a response to come in for an interview. And now, here I am.

Describe a typical day at the office for you.

It really varies based on the time of year, but on average, I start my morning at 6 a.m. catching up on emails, mostly from our programming and production based on the West Coast. Once in the office, we hold a quick marketing team pow-wow where we run through the day’s top items followed by full Sales & Marketing team meeting. After that, the day is off to the races and usually consists of prospective client meetings, deck build outs, executing partnership deals, tentpole event planning, and long term planning. I typically end my day around 8pm but with our West Coast-based team, I do calls and answer e-mails until about 11 p.m.

What’s the most challenging part of your job?

Being on a team that is literally responsible for building a multi-platform network from the ground up.