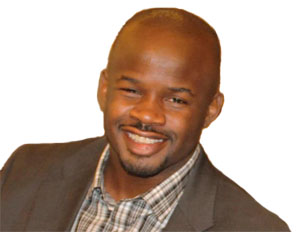 The difference between a consumer’s and an entrepreneur’s mindset can often be centered around one concept: The consumer sees a need and the entrepreneur sees a demand. One enterprising young boss saw the mobile app market booming, particularly with gaming, and took an authoritative leap to remix his own path to success in the industry.

Muoyo Okome, a game developer with experience at companies including Microsoft, decided to mesh creativity and enterprise to develop more than 30 apps for the market. His idea for hit game, Bike Race of Ninja Temple and its second part, A Harlem Shake Subway Run, came about after re-skinning themes from other hit apps or concepts and making them his own. He says his startup, Mega Rock L.L.C., has already earned him six figures in profits from advertising and in-app purchases alone—and in less than a year to boot.

The savvy go-getter, who grew up in Brooklyn with his Nigerian family, has been able to leverage his professional experiences, as well as his studies at Wharton and Princeton, to join the ranks of today’s promising young tech leaders.

BlackEnterprise.com talked with 29-year-old Okomo about his passion for turning ideas into profit, how technology has changed his life and how he was able to make a childhood dream of working for himself become a reality.

BlackEnterprise.com: How did you get involved with technology and later creating apps?

Muoyo Okome: From a young age, I was always interested in technology and entrepreneurship. I always thought, eventually, I’d work for myself. It was really about paying attention to the things I’m interested in, the world markets and looking at trends. I’ve always been fascinated and wanted to spend a lot of time learning about it, working on it and perfecting it.

Tell us about the process. How does an idea become a profitable mobile gaming app?

I start by looking at what consumers love and taking that to tech professionals who can make the ideas come to life. I work with developers and the artists, and we discuss edits and changes via Skype or the Web to get things to where I want them to be. The twist to it is I often buy already existing source code and re-purpose it to fit the concept I want to offer.

Many successful people credit awesome mentorships and relationship-building as a key part of success. How have those elements played a role in moving forward with your venture?

Having a great network and building relationships are important. There have been people who I respect and I know who they’re doing well, and I engage them in conversation. I make sure I’m not always just asking them for things but offering something in return. That can be very powerful because when you’re constantly taking, it can get quite annoying. … There have been many to help me move forward, from my professors to entrepreneurs. It’s funny, because you think that if you’re in the same business, [other tech entrepreneurs] won’t be open about what they’re doing or what’s working for them, but I’ve met several who have been really helpful to me.

You have ties to Africa, as you’re of Nigerian heritage. How do you plan to reach back and take your ventures global?

Specifically with Africa, I plan to develop games that will incorporate the culture and locales. I’m pretty excited about that. There are other things I’d like to do as far as working more directly in Nigeria in the future. I’m watching how that market develops as far as mobile gaming goes. It’s really starting to [increase] there because smartphones are becoming more popular.

What advice do you have for other young leaders getting into the app business?

Get to know a lot about the marketplace. Look at the publications that focus on applications or development such as Tech Crunch and Inside Mobile Apps. There are a ton of sites and books that can be resources. Once you’re immersed in a marketplace, you’ll start seeing different ways to make money.

Having the education behind you definitely helps. The benefit of my background in programming and business management is knowing how to problem solve, manage risk and form partnerships, as well as building a professionals network.

Take more risks early. Bet on yourself early. When you’re young, and you want to go start a business, and it doesn’t go well, it’s not such a big deal. Sometimes, people of our parent’s generation will make you feel it is, but taking risks early and often is OK.

In the New York City area May 2? Join BlackEnterprise.com as we host IBOM L.L.C’s “Africans Creating Technology” panel and networking event. Muoyo Okome will be a featured expert along with other global tech entrepreneurs and advocates. Find out more information at MayvenPR.com.