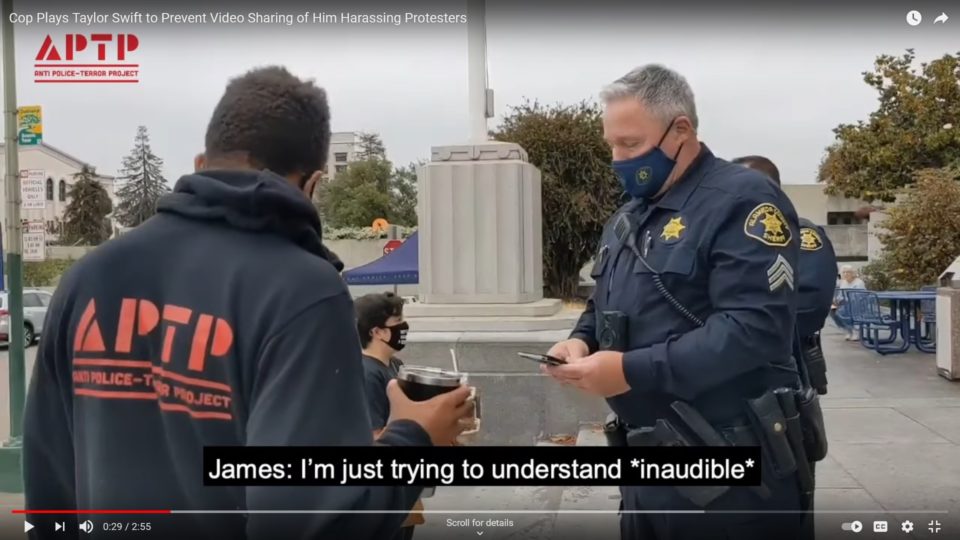 There are always stories surrounding the misconduct of police officers, specifically when it comes to the way they deal with people of color and/or people who are considered poor.

Yet, even with the documentation of the misdeeds of police officers, they routinely get away with it. Now, with police officers realizing that their actions can now be recorded by civilians, one cop found a creative way to prevent a protester from recording him and placing it on social media.

According to Gizmodo, earlier this week, a group of protesters gathered at the Alameda Courthouse in Oakland, California, to attend the pre-trial hearing for Jason Fletcher, a police officer charged with manslaughter for shooting and killing a Black man, Steven Taylor, inside of a Walmart department store last year. As the protestors joined with Taylor’s family, advocates for justice gathered around to listen to the hearing broadcast on the courthouse steps.

Anti-Police Terror Project’s Policy Director James Burch is seen speaking to a police officer on the steps of the courthouse. During the conversation, someone is recording a video of the confrontation. However, the sheriff’s deputy confronting Burch is seen on video taking out his mobile phone and he cranks up a tune loud enough to be heard and picked up on the bystander’s video—a tactic to keep the video of the confrontation from being uploaded on YouTube since the channel would strike it down for copyright violation.

Burch is seemingly in disbelief looking at the officer playing Taylor Swift’s “Blank Space” on his mobile phone’s speaker, then places it onto his shirt.

“You can record all you want,” he tells the person who is recording the video, “I just know it just can’t be posted on YouTube,” the officer admits.

The officer then turns toward the camera to reveal the name on his uniform—David Shelby.

A cop demanded we move #Justice4StevenTaylor banners. We asked him why. He pulled out his phone & played a Taylor Swift song.

“You can record all you want, I just know it can’t be posted to YouTube.” pic.twitter.com/avpf1LUvCd

The approach that is being utilized by Shelby is a known police tactic. Police officers are using YouTube’s copyright flagging system against public citizens in order to have videos taken down.

According to Vice, earlier this year, a Beverly Hills officer chose to use a Sublime song as the background for the conversation he was having with a man who came to dispute a ticket. (The video can be seen on Instagram.)

The song would most likely trigger YouTube’s automated content ID system, which would flag Swift’s copyrighted song and issue a block on the entire video. It also raises the chances that a record label would explicitly request the video to be removed.