Cultivating a Legacy: GFive Co-Founder Talks Why More Black Entrepreneurs Should Get Into Cannabis Growing 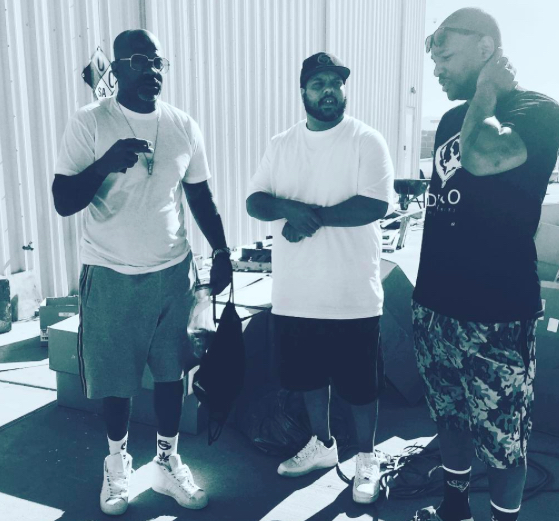 Today, April 20, marks an annual focus on all things cannabis. For some, recreation in the form of smoking or consuming edibles is the vibe, but for others, cannabis is the golden ticket in a $7.5 billion market, with more than half of that being medicinal. Larry Smith, co-CEO and co-owner of GFive Cannabis Cultivation in Las Vegas, is part of the latter, but with a twist: With his cannabis cultivation business, he’s building family legacy, reinvesting in low-income communities, and paying it forward—seeking to contribute to a different, more positive narrative of minorities and cannabis.

The GFive staff, which includes Smith’s wife, Maribel, his business partner, Shawn Holman, and their sons, celebrated their first crop in February after embarking on a four-year process to get the business up and running. They’ve been going full steam ever since, attracting support from entertainment and marketing mogul Damon Dash (who also serves as chief marketing officer of the company), and supplying safe, premium cannabis products for the medical market in southern Nevada.

Smith, a real estate entrepreneur, owns a community center in the neighborhood where he was raised, Las Vegas’s Berkley Square (a historic area where the first subdivision by and for African Americans in the region was built), and he plans to continue carrying the torch of African American pride in community through this latest venture.

GFive’s 8,591-square-foot facility was designed from the ground up to cultivate a product that is incorporated into remedies for patients suffering from diseases including cancer and HIV, and Smith takes great pride in his motivation for even getting in the marijuana game. Smith stresses that GFive, which was launched with a $3 million investment by him and his partners, is part of a continuation to contribute to the proud heritage and improving the outlook for the future’s black business leaders.

“[Launching a cannabis cultivation business] is an awesome feeling. We [understand] that we represent the urban youth of America, and to come into Nevada, represent as well as we do, it’s an awesome feeling,” Smith says. “Also, to have people who looked you in your eyes and said, ‘Man, I don’t think y’all are going to be able to pull this off; and to know we did it with pride and integrity and honesty—that’s a very fulfilling feeling for us.”

The business is also a labor of love that Smith hopes to pass down as a way to build generational wealth. “I’ve always had an entrepreneurial spirit. I always wanted to leave my kids something beyond a life insurance policy. It’s been beautiful to bring it all together for our family,” Smith says. ” My wife Maribel, has an  M.B.A. and is very smart. She did all our [licensing and business] paperwork… the research. She helps to make sure we’re on point with regulations and all those things. My son handles packaging and logistics, and Shawn’s son does growing. It’s been nice to walk in the room to see our sons on harvest day and they’re playing music and enjoying themselves. They’re working knowing one day this all could be theirs—if they choose to take it. It’s a beautiful thing.”

Smith sees the business as a way to promote the pursuit of lucrative and socially responsible careers for minorities in the cannabis industry. “We want to be able to expand to create jobs, and we want people [of color] to [understand] that this is a market they can get in[to],” he says. “It doesn’t just have to be an owner standpoint. There are other things they can do; packaging, clothing. We want kids to go to school for biology, horticulture, agriculture. If you can grow a tomato, you can grow this plant. I hope I can spawn the next scientists to find the cure for chronic pain.”

Though covering startup costs can be quite expensive—a challenge Smith sees as part of a systematic problem set up to keep many minorities out of the cannabis business—he recommends black entrepreneurs pool their resources to get the capital needed to start. “Don’t be afraid to pull together and put your money together. If you have strong leadership, you’ll be successful, ” he says. “It’s important we don’t get left behind. Our people still have that negative connotation that [marijuana is] bad. And it’s obviously because we’ve been getting incarcerated for it and so we still don’t believe that [the legality possibilities are] real [for us]. I think we should catch up, get focused, and not be afraid to tell our kids it’s OK to go to school for agriculture in this field.”