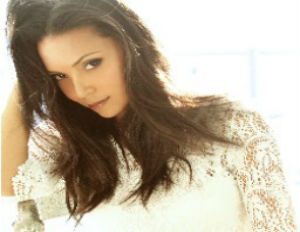 TV One’s new sitcomÂ Born Again Virgin premiered last night, August 5, in all its feminine glory. The comedy which is heavily written and produced by women, chronicles the dating journey of a sexy, quirky and newly celibate woman, played by actress Danielle Nicolet and her two friends.

BlackEnterprise.com caught up with Danielle Nicolet, before the season premiere, to talk what attracted her to the role, how the show redefines ‘sexy’ and how these three female characters may highlight African American women in a non-traditional light.

BlackEnterprise.com: What initially attracted you to the show and the role of Jenna?

Nicolet: Well, the show in its essence is about a woman who kind of has everything going for her in life but nothing seems to be working out in the relationship department, so she decides to take sex out of the equation. I think, ultimately, it’s about changing the attraction of a relationship; changing her sense of self and how well she knows herself. She brings the audience along on her journey because she writes about it. I think she’s growing because she’s learning how to stop defining herself by how attractive she is found by men.

But she’s still sexualized, interesting, fun and funny, which is the main thing that attracted me to the show. That, and the fact that it’s 100% written and produced by women.

Nicolet on highlighting African American women in a non-traditional light:

The show has a really nice, different tone about it that I don’t think we’ve seen on TV [or] an African American sitcom. Alot of the stuff that we see is the way men in a writers room think women act when we’re by ourselves, and they could not be more wrong. There’s no classic African American female character arc type in the show. There’s no ‘naggy wife.’ There’s no ‘church lady.’ There’s no ‘token black best friend’ who doesn’t do anything. None of the three women on the show spend their days and nights pining to be married. I feel those are the sort of characters that, sometimes as African Americans, [we] write ourselves into on TV.

What do you hope women watching take away from the show overall?

I hope that they see themselves. I hope that they see their friends. I hope that they see how funny and likable and relatable we, as African American women, [are]. We have one character [on the show who’s] having a little too much sex; that’s Tara — Eva Marcille’s character — and another who kind of suffers from that, ‘I’m so ambitious, men kind of view me as a threat,’ and that’s Meagan Holders character. And then we have mine, who is trying to be more discriminating in her relationships with men and do some serious insightful self analysis. I hope what people take away from it is sexuality, in all of its colors, [but] most importantly that we’re valuing ourselves, treating ourselves with the worth that we inherently carry, and that we’re reflective of African American women’s reality.

Watch Born Again Virgin on TV One Wednesdays at 10/9c.