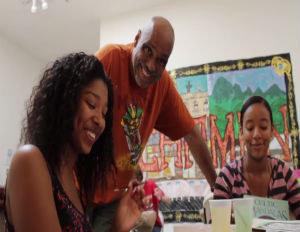 Founded in 1995 by Danny Simmons and his younger brothers Russell Simmons and Joseph “Rev. Run” Simmons, Rush Philanthropic Arts Foundation was created to bridge the gap between the access that low-income minority communities have to arts education.

Starting out as an art gallery in the Chelsea neighborhood of Manhattan that provided emerging artists with the opportunity to showcase their work, Danny Simmons quickly noticed the economic division that was taking place within the community.

“I started noticing it was kids and people across the street in Chelsea that lived in public housing that weren’t coming over to the galleries on the other side of 10th avenue,” said the oldest Simmons brother. “One side was projects and one side was art galleries.”

To fix this problem, Simmons approached the neighborhood organization Hudson Guild about sending some of its students from the after school program over to the art gallery. Following this initiative, Rush Philanthropic Arts Foundation was formed, creating opportunities for arts education to be brought to the classroom of thousands of students across the New York City area.

With studies showing that low-income students exposed to arts education in high school are three times more likely to graduate and earn a bachelor’s degree, Simmons says that art plays a major role in empowering students to be more involved in their academics as a whole.

“You start looking at a kid who doesn’t really have a lot and then all of a sudden they are creating things out of their own imagination. It empowers them and gives them a sense of purpose and then they become more interested and more involved in all their academics,” says Simmons.

In addition to positively impacting the overall academic success of a student, Simmons also says that arts education speaks to the needs of educators who are pinching pennies with budget cuts. Serving as a former chairman of the New York State Council on the Arts, he explains how each dollar invested in arts education is returned almost double the amount.

“Every dollar invested in arts, in New York state at least, brings back $1.72 because that’s how much cash revenue comes back when you consider all of the arts that are in New York,” says Simmons as he refers to performances on Broadway and other art opportunities that are offered in the city.

With this year marking the foundation’s 20th anniversary, Simmons says that it’s great to see how the philanthropic organization has grown over the years to impact thousands of kids throughout the New York area. Hosting several fundraiser events throughout the year to raise money for its educational programs, the Simmons brothers are gearing up for their annual Valentine’s Day luncheon on Friday, Feb. 13 that will honor Daymond John, Cynthia Rowley, Bill Powers and MLB player CC Sabathia along with his wife Amber.

To learn more about Rush Philanthropic Arts Foundation visit their website at rushphilanthropic.org.