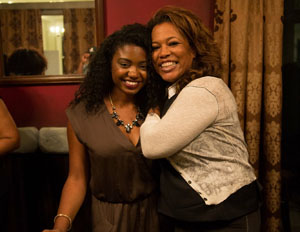 #HerAgendaLive gave entrepreneurs a chance to end their work week with some much needed motivation last Thursday, as they took a peek inside of journalist, novelist, and HRDCVR magazine co-founder, Danyel Smith’s, powerful Agenda.

Hosted by Her Agenda Founder,Â Rhonesha Byng, women gathered in a lower Manhattan co-working space to talk work, life, and the business of it all.

“I have admired Danyel’s career since I could remember. I fell in love with journalism and media at 16 and there’s certain names that come up that you follow and Danyel was one of them,â€ said Byng. “She’s come out to launch HRDCVR. It’s been a long journey for her and I thought this would be the perfect time to have her come out.â€

HRDCVRÂ is a culture magazine Smith birthed with her husband who is also a journalist and the former editor of XXL magazine. The magazine is said to have been “created by diverse creatives for diverse creativesâ€ and that niche appears to fit Smith’s persona very well. Detached from the 9 to 5 cube life, the Oakland-native pretty much writes to the beat of her own drum. She says it’s nothing for her to work for a publication for two years and then take two years off, as she now puts her sanity, happiness, and creativity first.

“Being on staff has its perks,â€ said Smith. “The access, the confidence that you can sometimes feel saying ‘I am Danyel from Billboard,’ and those types of things but, I think also, especially this day in age, those things aren’t as secure as they used to be. What we have come to realize is, at the end of the day, what we have to depend on is ourselves and our community; our friends and creatives that we’re around all the time. It’s been revolutionary in my life actually.â€

To learn more about Danyel Smith, and to catch the next #HerAgendaLive event, head over to HerAgenda.com.