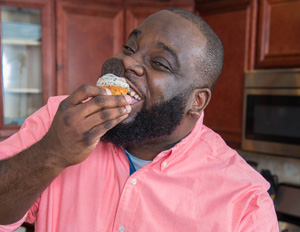 Not many black male cooks and food bloggers are making such big waves like Darius Williams, creator of DariusCooks.com.

Although he’s been a food blogger for more than eight years, Williams has recently enjoyed popularity online with his delicious looking, easy-to-prepare recipes, brand of humor and dynamic dinner parties and cooking classes he hosts all around the country.

He says the recipes he shares and his way of cooking have a “soul elementâ€ and he further describes his style of cooking as “comforting,â€ saying, Â “I try to make sure every recipe has no more than five steps. If you look at any recipes on the site … there are no weird ingredients.â€

In addition to gradually building his brand on the premise that his dishes are “easy, simple, delicious with familiar flavors presented in brand new ways,â€ Williams decided to push the envelope and ask himself, “What can you do to stand out and make it a little bit different?â€

Being relatable is hugely important to Williams, which is why he engages with people further via his blog and social media accounts. “People love the fact that I’m just like them,â€ he says. Part of what makes Williams so popular online is the fact that he infuses his brand with a unique brand of humor. To further connect with his audience, Williams started sharing hilarious videos, with one popular one being affectionately called, “Fat Prayersâ€ highlighting his love for food. The videos have gone viral, garnering thousands of likes and shares on Facebook alone.

I'm on the way…and I want extra waffle fries.

Soon, his online community started asking him to come to their cities. “I’m sensitive to the voices of those who follow me,â€ he said. He took his talents on the road, hosting Dining With Darius Cooks and Cooking with Darius Cooks events. Following his own philosophy of “Where there’s provision, you follow,â€ he traveled from Washington, D.C., to Los Angeles, hosting dinner parties and cooking classes that are often sold out within minutes.

His passion for cooking is certainly palpable and it was that same passion that allowed him to walk away from a lucrative, full-time job to devote attention to his brand. It appears that thus far, taking the leap has paid off.