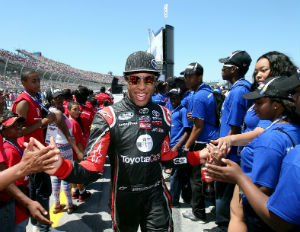 Darrell Wallace, Jr. has a rÃ©sumÃ©Â that reads far different from your average 20-year-old. With a booming race car career that’s slowly making him a household name, historical career titles under his belt and no plans of stopping anytime soon, the Alabama native is shaping up to be just the hope we need in a sport with very few brown faces.

“I’m just some young kid who’s different in many ways and who’s just out here trying to make a name for myself and give it my all each and every race,â€ Wallace tells BlackEnterprsie.com. “I just go out there and try to break into the sport as a whole and diversify it.â€

Wallace is a product of NASCAR’s Drive for Diversity program, which aims to increase female and minority participation in the sport, and credits the organization for much of his career success.

From his historic win at Greenville Pickens Speedway at age 16, where he was the youngest and first African American to win a race in NASCAR K&N series history, to a reality show with BET and a 2010 Rookie of the Year award from NASCAR K&N Series East, Wallace credits his experience with the diversity program for his success.

“I really enjoyed my time with those guys over there and I really don’t think that without them I would be here today.â€

RELATED: For Darrell Wallace Jr., an Add of a Victory to His Brand’s Winning Smile

Wallace, whose nickname is Bubba, made sports history again in October 2013 when his win at Martinsville Speedway made him the first African American to win a NASCAR National Series since 1963. But don’t think the pressure of living up to his historic wins makes Bubba crack during competition time; he makes it evident that nothing gets in the way of him winning.

“If [I] can just go out there and keep winning and let the other stuff settle in is how I like to go about things and not worry about the pressure that’s on me. For me, it’s just to go out there and have fun. That’s the only pressure I put on myself,â€ Wallace says.

His ability to not let the pressure get to him by no means undermines his awareness of his platform and he recognizes that his presence serves as inspiration to the next young kid who wants a career in the race car business. As a 20-year-old who obviously found his passion for race cars at an early age, Wallace urges any parent who has a child wanting to enter the business to offer as much support as they can.

“I always say it’s easier to go out and buy a basketball or football than it is to go out and buy a race car or go-kart. That’s the biggest thing about it. From a financial standpoint it’s tough. But if they really want to do it, support them and stay behind them and give them your all. You can easily figure out if someone has it or doesn’t,â€ Wallace advises parents.

On May 3, 2014, Darrell participated in his first NASCAR Nationwide race at Talladega Speedway, and after an inevitable accident, the young star finished 31st. While his end result fell short of his top 10 finish goals, Wallace’s determination, passion for the sport and desire to be great keeps him going and it’s this same drive that he encourages any other young kid who wants to follow in his footsteps to adopt.

“You got to want it. You can’t just come in here and be forced to drive race cars. You got to want to drive and travel all over and do different things and be ready for what’s next on the table. There have been plenty of times where I could have easily given up and turned everything down and went and did something else, but it’s a challenge and I like a challenge.â€

But racing isn’t the only challenge that interests Wallace. His passion for photography often puts him behind the lens of a camera, and when his race days are over, Bubba says that photography may be the next industry he enters. However, don’t expect him to leave the track anytime soon as he makes it clear that he has a few fall-back career options, “but racing right now is [his] priority.â€