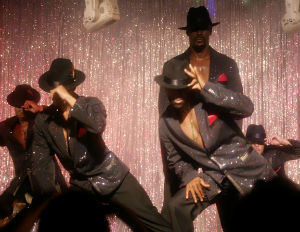 If you’ve followed Darrin Henson throughout his acting career, you know he’s no stranger to the world of dance and choreography. With a long list of successful films including, Stomp the Yard, Life Support, Soul Food, The Last Stand and more, he now adds “Chocolate City,” a film about a struggling college student who delves into exotic dancing.

Although Henson’s role within the movie called for dance–a skill he’s very familiar with, it made him a little nervous. “There’s nothing easy about walking into a club full of 200-300 women–it’s a feeling that is intimidating, yet indescribable. If you want to talk about having power, that’s true power,” said Henson.

On the heels of the Chocolate City premier, BlackEnterprise.com caught up with Henson to learn how he and co-stars, Deray Davis, Tyson Beckford, Robert Ri’chard, Vivica A. Fox and Michael Jai White, prepared to bring the male strip club experience to the big screen.

BlackEnterprise: As an actor what appealed to you about the subject of exotic dancing?
Henson: I thought the genre was very appealing to America and the rest of the world. When you make the right choices as an actor, you can really win big. And I thought that anyone who was daring enough to write a story about this subculture of dancing. The script was brave enough that it could win big, so I took the chance.

Although you have a background in dancing, how did you prepare for the role of an exotic dancer?
As a choreographer and dancer, I’ve done pop culture music and choreography so this was really different from the subculture of being a male stripper or exotic dancer. Believe it or not, I was really nervous. I was on stage and all of these women were out there and had dollars blaring–I can’t say it was easy because it was very intimidating. Other than working out and making sure your body is in the best shape it could be, I don’t think there is any way you can actually prepare for a role like this, unless you’ve done if before. But all the guys came on set in shape and we worked out all the time, so it was like a healthy competition for everybody in the film.

Did you have to venture out to a “strip clubâ€ to get into character or feel the vibe of a strip club?
Yes, we actually went a couple of times to get the vibe. Thankfully we have a cast of former and current exotic dancers, like Tyson who’s done a stint with exotic dancing, at one time; And Bolo the entertainer, who actually is an exotic dancer; Jamaika is an exotic dancer as well.Â They invited us all out to come out and see them work. These guys already have a sense of empowerment, but that was my first time, so intimidation definitely sets in. There’s nothing easy about walking into a club full of 200-300 women gathered together–if you want to talk about having power, that’s true power. It’s a feeling that is intimidating yet indescribable.

Is there anything viewers might be surprised to learn about in this film?

Yes absolutely. The performances were really strong.Â Deray DavisÂ plays Robert Ri’chard’s brother in the film and like all families they take chances on things. People will be pleasantly surprised about the family’s perspective in the film. Vivica Fox really delivers a strong performance–so ladies bring your tissues. And there’s also a coming of age for Roberts character that I think we haven’t seen in a long time.

Beyond the premier, what else are you working on?
I play a detective on BET’s Single Ladies and I’m really happy to be on the show. I have to shout out Queen Latifah and Shakim for the great work that they do. And I am also touring the country with my new book, “Ain’t That the Truthâ€–how to admit, acknowledge, and invite truth in your life. VisitÂ DarrensonHenson. com to learn more.